The Chestnut-winged Cuckoo (Clamator coromandus) is one of the more beautiful among the many cuckoos. The adult is a sight to behold and will no doubt excite the most hardener birders. What more is its impact on birders new to the scene.

The adult has a back of metallic glossy black, a white nape, chestnut wings, black tail, rufous throat, white belly and dark vent. Not forgetting the presence of the fabulous dark black crest.

Well, in mid-November 2007, Meng and Melinda Chan scoured the Dairy Farm area looking for this cuckoo. They had the good fortune to spot one taking a well-earned rest high up on a branch of a tree. The bird was extremely shy, hiding high among the foliage of the tree crown. They even succeeded in bringing home a few portrait shots of this beautiful bird (top).

At one point a Black-naped Oriole (Oriolus chinensis) appeared nearby, landing on a higher nearby branch. The cuckoo nervously looked up and immediately flew higher up the tree.

The Chestnut-winged Cuckoo breeds in the Indian subcontinent, Sri Lanka, South China, Indochina to SW Thailand. It migrates south to parts of Asia and Southeast Asia during winter, reaching Singapore as an uncommon winter visitor and passage migrant. If you work hard enough, you can still catch a glimpse of this beautiful bird as it arrives as early as 30th September to leave as late as 28th April.

Like many cuckoos, the Chestnut-winged is a brood-parasite, laying its eggs mainly in the nests of laughingthrushes (Garrulax spp.). 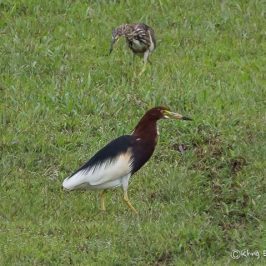 Khng Eu Meng was at Ang Mo Kio-Bishan Park in March 2017 where he photographed...