On 23rd March 2007 Pamela Lim experienced a private “raptor watch” of mainly Oriental Honey- buzzards (Pernis ptilorhyncus) and Black Bazas (Aviceda leuphotes) right outside her bedroom window (left). In the three years she stayed in her present apartment in Kuala Lumpur, Malaysia, she had never seen such spectacular display. She has uploaded a video of the encounter HERE.

“Something great happened this morning during my quiet time at my bedroom window… I thought I saw a swarm of bees… I almost leapt out of my bedroom window in excitement when I realised those bees were actually raptors…!

“I witnessed a total of four groups/flocks before I dashed away to church and with each flock, they circled eye level and moved from right to left and up the hot air column until they looked really like bees before they soared off…

“…swirling round and round…”

Each spring, these birds do a return migration, flying from Sumatra north-east across the Straits of Malacca to the west coast of Malaysia. They presumably return to Japan, western China and southern Siberia to breed.

Tanjung Tuan in Port Dickson is the site in Malaysia to view these returning raptors, as this is the shortest distance over the sea from Pulau Rapat in north-western Sumatra where the birds come from.

The migratory flocks that Pamela witnessed must have been among these returning birds. An earlier study showed that more than 70% of the raptors were Oriental Honey-buzzards, arriving first, from below eye-level to a maximum height of 30 metres. They were seen in flapping flight over the sea, to eventually take advantage of the rising hot air to gain altitude. Black Bazas and Chinese Goshawks arrived in gliding flight in flocks at a height of about 30 metres.
.
.
Pamela Lim
Malaysia
December 2007 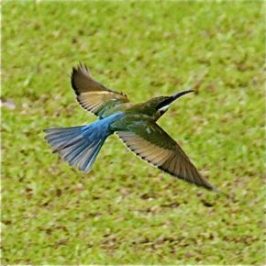 This is the time of the year when the migratory Blue-tailed Bee-eater (Merops philippinus) arrives... 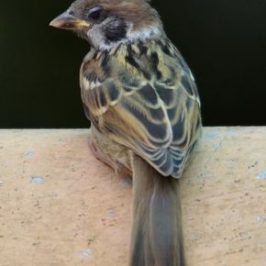