Gloria Seow was walking along Rock Path at the Bukit Timah Nature Reserve on the morning of 11th November 2007 when she spotted two Greater Racket-tailed Drongo (Dicrurus paradisus). What attracted Gloria to the drongos was that they were behaving like woodpeckers and nuthatches – clinging onto a vertical trunk of a dipterocarp tree and nibbling at what she thought was greenish white growth on the trunk’s surface (below). “Both drongos used their tail as an additional prop, similar to what woodpeckers would do, but they had trouble keeping up this unnatural yoga position for long and had to fly off frequently to a nearby branch to perch and rest before resuming their vertical balancing act. These drongos improvised too, clinging on sideways or even upside down at times. Has anybody ever witnessed such a curious act? And pray tell, what are they nibbling at?”

Haniman Boniran responded: “Yes I have witnessed this behavioural patterns in GRT Drongs before. A few times I was along Mandai Lake Road and along the roadside there are many trees that the drongos use as a feeding station. They would perch exactly how you described them and used the tail as additional support. There is a pair of resident along that stretch. I can’t identify the tree but its rather common along Mandai Lake Road. The birds would feed on exposed or rotting tree, boulders and ant/termite nests on the trees. So far I have spotted them feeding in this manner twice. Both times in the evening around 5-630 pm.

“This is also the location where the Changable Hawk Eagle (Spizaetus cirrhatus) snatched the Pink-necked Green Pigeon (Treron vernans) I was releasing sometime back.”

KF Yap thinks that it is the lichens that the drongos were after, either as food or nesting materials.

Susan Wong of Malaysia similarly witnessed such behaviour in the drongo at the Penang Botanical Garden. She recalled seeing a pair clinging on the trunk of an old, big tree, moving up and down very fast. At times they they spread their wings using their tail to support them. “It was a very strange scene to me and until today I have yet to understand what are they trying to do. I do recall noticing their vertical perch with wing spread out on a tree trunk – they did it very clumsily because their toes are not like woodpecker’s.” Greater Racket-tailed Drongo (left) often follows foraging woodpeckers, malkoha and arboreal squirrels. The drongo benefits from the invertebrates that the woodpeckers flush out. The drongo in the above account may have been following a woodpecker or it may have been collecting lichens or even bark fragments for nesting materials.

A recent study by a pair of researchers at the Pasoh Forest Reserve in Peninsular Malaysia reported the frequent association among various species of woodpeckers and the Greater Racket-tailed Drongo in the lowland forest. When a woodpecker landed on a tree trunk, the drongo would perch on a nearby horizontal branch just below it. The drongo often sallies forth for a flushed arthropod. When the woodpecker moves to another tree, the drongo followed.

The drongo on the tree trunk reported by Gloria may be going for an insect flushed by a woodpecker. It may also be collecting nesting materials. 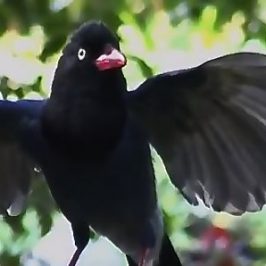 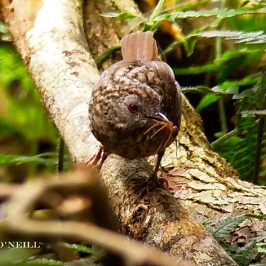