Trapping birds using birdlime is a worldwide problem. Birdlime is a sticky substance made from plant materials. Different countries use different materials and methods of preparation.

The birdlime is smeared along a branch that is then placed in a suitable location with a decoy bird. The decoy is usually left tied nearby and its cries will attract nearby birds. Once a bird perches on the branch it gets stuck and as it struggles to get free, gets further entangled in the gummy substance. The trapper returns to claim his prize, either as food or to be sold to the cage bird trade.

In many western countries this method of trapping is illegal. Not so in many Asian countries. Mandy Andrea of the Indonesian Parrot Project has this to say: “Yes, it is used because it is cheap. Following are photos we took of this practice. The glue (resin) that this farmer uses is readily available from a fairly common tree.

“He brings his lure bird that he keeps in this small cage (left).

“The lure bird is chained to the branch (below left). The resin is applied to the rest of the branch. What usually happens is the trappers will then return to work in the fields, and come back later. The lure bird attracts a variety of birds, not just his own species.

“He decides he doesn’t like the location. He picks up the branch, slings it over his shoulder, as he walks away, the lure bird dangling and swinging from its ankle chain (below right).

“In this kind of trapping, the wild birds land on the branch, their feet get stuck. They struggle and fall this way and that. When the trapper returns later, the trapped bird is stuck to the branch on many different parts of its body, and they are usually flopped over from the branch in an exhausted daze.”

Check out this link on birdliming and sign the on-line petition against such indiscriminate use of birdlime to trap birds HERE. This petition is against such a practice that is going to be legalised by the government of Catalonia, an Autonomous Community within Spain.

This method of trapping will be used to indiscriminately trap thousands of migrating thrush coming from northern Europe. The birds will be lured by “electronic appeals” meaning recorded birdcalls that attract protected as well as non-protected species.

This is also a problem in Southeast Asia.

Input by Mandy Andrea and KC Tsang, images by Mandy. 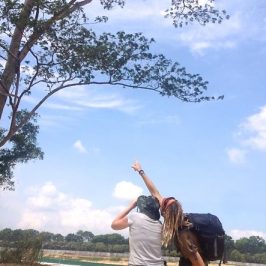