It was nearly 5 pm in the evening when suddenly there was a heavy drizzle. The next moment the air was filled with the sharp, loud calls of a sunbird. The call was persistent, coming from my neighbour’s bougainvillea bush. There, perching on a bare branch was a male Olive-backed Sunbird (Cinnyris jugularis).

He was obviously enjoying the drizzle, darting here and there, fluffing his feathers, stretching his wings, fanning his tail and vigorously preening (left: top and middle).

He displayed himself by throwing his head back, puffing his chest, the better to show off his metallic blue-black frontal area (below: bottom left and rihgt). At times the edge glowed with iridescence. Calling loudly and incessantly, he was moving his head from one side to the other. Noticing a nearby leaf with droplets of rain, he darted off to soak up the drops (left bottom).

Only later when I processed the images did I notice a few more interesting points. Most times he had his long and narrow tongue projected well beyond the bill (left top). Was he trying to collect the raindrops? Also, the bright orange pectoral tufts that are usually displayed during courtship are prominent in many of the images (below:top left and right, bottom right). Some white coverts were also exposed, emerging from among the wing feathers (below: top right). The fanned tail displayed the central black-tipped feathers and white side feathers (below: bottom left and right).

With his constant movement and frequent darting, I am sure they are not as obvious through the binoculars. But then, I was armed with a camera, not a pair of binoculars.

Was the bird enjoying the heavy drizzle and having a bath, thus spreading and exposing his feathers? Including his pectoral tufts? Or was that also a courtship display, showing off to a nearby female as reported earlier by KC Tsang? I did not see a female around him. Maybe I was not looking for one as I was then convinced that he was just enjoying the drizzle. I will keep a lookout for a female the next time. 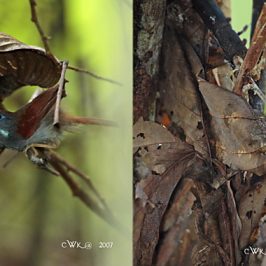 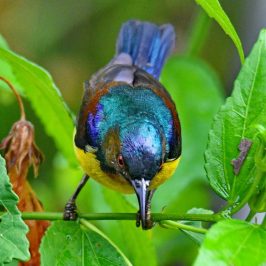