The Milky Stork (Mycteria cinerea), whose population is globally VULNERABLE, has a restricted distribution in Southeast Asia (above). Its population worldwide is estimated at 5,500 birds, confined mainly to Indonesia, with smaller populations in Malaysia, Cambodia, Thailand, and possibly Vietnam. Through the years the population in Malaysia has seen a massive decline. On the other hand, the Painted Stork (Mycteria leucocephala), although not globally threatened, is regionally threatened in Southeast Asia (above).

Both storks have been sighted during the last few years in Singapore, mainly in the Sungei Buloh Wetland Reserve. Their status here is debatable – either vagrant or escapee.

KC Tsang has encountered quite a few specimens in Sungei Buloh that are possible hybrids of the two species. This has been confirmed by David Li, Waterbird Conservation Officer with Wetlands International. David believes that it is possible that these birds could be one of the free flying hybrid.

In a Wetlands International study on the status of the Milky Stork population in Malaysia during 2004-2006, it was reported that hybridisation does occur between free-flying Milky and Painted Storks in the zoos/bird parks in Bangkok, Kuala Lumpur and Singapore. 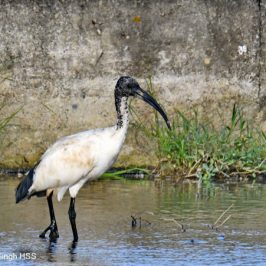 “While in Taiwan we saw the African Sacred Ibis (Threskiornis aethiopicus aethiopicus) that accidently entered...