“So far we’ve been speaking of House Crows (Corvus splendens) going after smaller victims, but once I’ve seen them tackle a bittern in the air. “It was a Cinnamon Bittern (Ixobrychus cinnamomeus), an unfortunate Glass Window Casualty (see 1, 2). It reportedly crashed into the classroom block of my secondary school, and together with a friend I took it in and ‘nursed’ it (left top). It was nothing much, just some grazes on the wing and it was in a bit of a shock. Well, after a few days it looked healthy (and certainly much more aggressive) enough, so we decided to release it. We placed him on a nearby open field, and he lifted off beautifully and with purpose. We watched it go into the distance… and then, to our horror, a flock of about six or seven House Crows took flight from a tree close by, and cawed after it (left bottom). They closed the gap and tried to claw at it, the poor bittern trying its best to evade. It was a gripping and shocking aerial chase, a one-sided battle. My memory’s hazy, so I can’t remember the specifics but it ended with the messy flurry of black and brown headed for the ground. They fell behind some buildings some distance away, so I did not manage to find out what then happened. I was never really fond of crows to begin with but from that day on I absolutely disliked them.

PS: “I find that the Black-naped Orioles (Oriolus chinensis) frequently chase after crows, particularly if the crows have something in their bills – food? Kudos to the orioles.”

(Images by of bittern by Tang Hung Bun; crow by YC Wee) 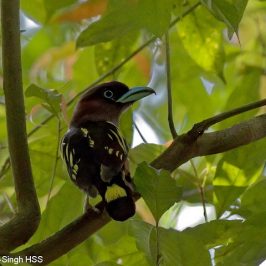