It was 4 pm on 28th July 2007, just after a heavy downpour when Ng Bee Choo came across a single Red-legged Crake (Rallina fasciata) taking a bath in a shallow puddle along the road leading to the Singapore Botanic Gardens’ Visitor Centre. She managed to capture a few shots with her camera, as shown on the left.

The Red-legged Crake is an uncommon resident and a winter visitor to Singapore. It is a secretive bird and usually not easily seen. Interestingly, it was first recorded on 3 Jun 1898 in the Singapore Botanic Gardens.

Since the first sighting, it had been seen in various forested as well as non-forested locations on the main island. The bird is usually associated with ditches, streams, understorey of forests and dense scrub. It does breed locally, first reported in January 1985 in Hume Heights, possibly earlier in 1944. Chicks are reportedly seen in March, May and August.

Migrants arrive from October to April. 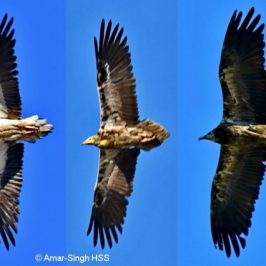 “We heard from some bird watching colleagues about Egyptian Vultures (Neophron percnopterus ginginianus) collecting at...