In May 2007 Melinda and Meng came across a pair of nesting Grey-rumped Treeswift (Hemiprocne longipennis) in a patch of secondary growth in the north of the island. They built their nest attached to a slender branch of an acacia tree (Acacia auriculariformis) some 20 metres high. The sexes are easily distinguished, with the male having rufous ear-coverts (left top) and the female blackish ear-coverts (left bottom).

The nest is a half-saucer made from hardened saliva incorporated with feathers, mosses and flakes of tree bark. Ornithologists believe that the feathers come mostly from the bodies of the birds themselves.

Chantler (2000) reports that the single egg laid is stuck to the nest surface with saliva. And because the nest is so frail and delicate and only attached at its side to the branch, the bird does not sit directly on the nest during incubation. Based on the images obtained, the weight of the bird was obviously not wholly on the nest. It was sitting on the branch and had its tarsus over the nest with the talons clutching the nest edge. This position allowed the brood patch to make contact with the egg. Gibson-Hill (1950) has similarly reported that the parent birds brooded by perching on the branch above the nest and fluffing their breast feathers out to cover it.

Both birds helped incubate the egg. Melinda and Meng witnessed the changing of shift three times, at 1.20 pm, 1.30 pm and 1.40 pm on three different days. Each time the female flew in and carefully perched besides the incubating male (below left). The male then flew off and the female carefully slided over the nest (below right). On one day there was no bird incubating the egg at 1.00 pm. However, 20 minutes later the female flew in and settled on the nest. Unfortunately, before they could observe when the male flew in to relieve the female for incubating duty as well as make other observations, the tree was heavily pruned and the nest destroyed.

At shift changing time, the incubating bird flew off at an angle, dropping backwards. This no doubt helped minimised the chances of the feet lifting the egg from its shallow bed as the bird flew off. Again, this is consistent with the observation made by Gibson-Hill (1950).

The images below by Daniel Koh of the bird at rest clearly show the characteristic long wing tips crossing over the shorter forked tail.

Some details of the nesting have been posted earlier. 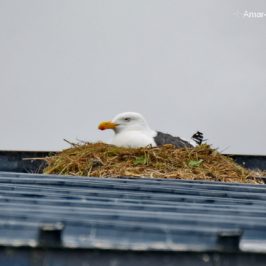