On 6th April 2007 Eddy Lee chanced upon a nest of the Collared Kingfisher (Todiramphus chloris):

“The nest was located about 3 m above the ground in a dead tree trunk (above). The chicks were still young for I did not notice their beaks protruding from the nest hole when the parents returned with food. Both parents took turns to feed them at an interval of about 10-15 minutes. A variety of food was included in the chicks diet, consisting of forest cockroach, beetle, earthworm, centipede and gecko, among others (below). “By 29th April, I noticed that the two chicks had left the safety of the nest and were seen flying with the parents around the nest area (below). The parents continued to bring food for them. Seven days later the chicks were seen hunting by themselves alongside with the parents. “On 25th June or less than two months after fledging, the chicks had left their parents as they were nowhere to be seen. Presumably they started their own independent lives.

“The same pair of adults started another brood soon after. They were again seen bringing food back to the nest for the second brood of young ones. In mid-July there were no signs of protruding beaks from the nest hole, so not certain how many chicks were there this time. “The parents continued to fetch food back for them. The chicks were noticed to be very quiet, no chipping sounds were heard. However, bad weather prevented further observations till 20th July when the pair of recently fledged juveniles was found on a branch nearby (left). As before, the parents were seen to hunt and fetch food for them. However, a few days later, three recently fledged juveniles were seen together. The pair obviously raised three chicks during the second nesting.

“Observations are being continued.”

NOTE: The close-up of the two fledglings in the second from bottom image clearly shows what Wells (1999) describes juveniles as having “…fine black scalloping across the breast.” 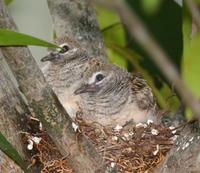 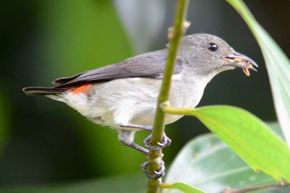