Introduction: The location of the eyrie was at one of the two sites close to Ipoh, discovered on 29 May 2005 by Chiu Sein Chiong, Laurent Molard and Dr. Chan Kai Soon where juvenile peregrines were observed flying (Suara Enggang Vol.14, No.3, 2006 Pg.11-15)

Observations from 22 January to 11 June 2006 were carried out weekly from the time of courtship displays to incubation and the frequency of our observations increased to 3-4 times a week during the brooding to post-fledging period. Courtship: On 22 January 2006, Chiu Sein Chiong (CSC), Ooi Beng Yean (OBY) and Avril McLeod (AM) went to check out the site and heard the calls of a peregrine before a male appeared. It glided slowly across the face of the hill and displayed by “shivering” its wings similar to Crested Goshawk (Accipiter trivirgatus). Later in the evening we returned to the site and saw the female fly out from a hole (later to be used as the eyrie) in the face of the hill and perched on a tree. The male after finishing off a prey joined the female on a tree and the pair copulated.

Thereafter, follow-up observations were carried out by CSC & OBY. On 31 January, an hour after female had finished eating a prey it flew to a ledge. Male joined the female on ledge and in another courtship display started to bow and raise its head similar to Spotted Dove (Streptopelia chinensis) and Peaceful Dove (Geopelia striata). On 5 February, the pair copulated thrice within a half-hour period. The pair was also observed to fly to various ledges to eat prey that were most likely stored from earlier kills.

Incubation: On 12 February it was suspected that incubation was underway as the female walked out of the eyrie when the male appeared and landed above it. Female did not join the male as it usually did and after about 2 minutes female walked back into the eyrie when it realised that male did not bring back any food. On 14 February there was again only one adult around and no courtship displays observed reinforcing the belief that incubation was underway as suspected.

On 12 March it was confirmed that male also played a role in incubation duties when it exchanged places with the female. It was again noted that prey was kept in a few places as female, after preening for about 10 minutes on a tree, flew to a ledge and ate a prey. On 19 March, the male flew in with a prey and passed it to the female at the entrance of the eyrie. Female flew to a ledge and ate the prey while male went into the eyrie.

Hatching & Brooding: On 26 March the female flew out of the eyrie and perched on a tree leading us to believe that the egg(s) had hatched. This was confirmed on 2 April when both adults were seen flying towards the eyrie with one of them carrying prey. Throughout the brooding stage female guarded the eyrie, in the initial stages standing at or near the eyrie and later on trees on the hill top. Male was the main provider of food and each time male flew towards the eyrie the female would meet the male at the eyrie entrance, collect the prey and go in to feed the unseen young herself, not allowing male to do so. Occasionally female also hunted on its own especially when male did not return after a few hours.

On 9 April loud excited calls of young were heard coming from inside the eyrie when the female collected prey from the male at the entrance of the eyrie. On 16 April, CSC, caught the first quick glimpse of the wing of a young inside the eyrie and finally on the morning of 23 April and again in the evening one big chick was sighted, upperparts generally still with white downy feathers. From the evening of 23 April onwards Connie Khoo (CK) joined us in our observations. On 26 April some of the white down on the chick had started to turn a darker colour. On 27 April CK and AM saw two chicks (left) standing on the ledge of the eyrie waiting for food. Later male deposited food on the ledge of the eyrie as female flew in to take over the prey and fed the young. Similar behaviour was observed throughout the caring of the young where female was the one that fed the chicks every time. Chicks were mostly white with black wing edges and the beginnings of a black hood visible at the side of the face. One of the chicks seemed to have a more hooded appearance than the other. Throughout the brooding period female guarded the chicks while male was the provider of prey, later when the young were bigger female also occasionally hunted for bird prey.

Female was very protective of the chicks and dive-bombed a pair of resident White-bellied Sea Eagle (Haliaeetus leucogaster) if any of eagles crossed an invisible boundary. The female also bravely dive-bombed at monkeys until they scampered away from the face of the hill.

From 1 May onwards the young started to train their wings (top). By 7 May, both fledglings were exercising vigorously and they would flap their wings and run into the eyrie at the same time (below). Juveniles also shed most of their white down feathers. They often stood on the ledge in front of the eyrie soaking in the happenings around them and surveying the wide expanse below the hill. The young were also able to eat on their own when male was seen depositing food on the ledge. The female as usual joined the male but after ensuring that male left the eyrie. Female also flew off and the fledglings took turns to eat the prey. After eating, the bigger fledgling pulled out remaining white down from the smaller fledgling and after a while the smaller fledgling laid down on the ledge to sleep. On 9 May the bigger fledgling ventured onto a ledge below the eyrie, it was also seen flapping its wings strongly and appeared very eager to attempt its maiden flight.

Fledging & Post Fledging: On 10 May, the bigger fledgling fledged while the smaller fledgling followed suit on 12 May. Initially after fledging the young stayed on the ledges and rocks and were not very active as they learned to improve their flying skills. By 16 May their flying was much stronger and both started to play games in flight and chased each other around. The juveniles were also able to pluck off feathers on their own from the prey brought back by the adult male. Female continued to guard over the young.

On 19 May, the juveniles had progressed from landing on rocks to landing and perching unsteadily on tree branches. The bigger juvenile had also learned to take bird prey from the talons of the adult female while on the wing and also pluck feathers off the bird prey on their own. The adult female actively encouraged and enticed the young to master their flying skills. Back of juveniles were slate grey while breast was a “peachy” color (orangish) with very dark streaks.

The juveniles having mastered their flying skills would fly down onto the large rocks around the base of the hill and sometimes would come as close as 50 feet (above) from us. They would also eat the prey on these rocks. The juveniles generally stayed within the vicinity of the hill until 19 May but by 21 May they started to make short explorations away from the eyrie area.

Discussion: This full observation gave us an opportunity to study and collect initial data on the breeding habits of Peregrine Falcon in Malaysia. Further observations will be carried out next year to determine if the same eyrie will be reused and also the breeding success rate and number of chicks produced. Due to the height of hill it was difficult to identify the species of bird preyed upon by the Peregrine Falcons but it was observed that they preyed on a variety of big and small species of birds whereas the other breeding pair at Tasek (Suara Enggang 2006 Vol. 14, No.3) preyed on House Swift (Apus affinis) most of the time. Continuation – 2nd nesting (2007): In December 2006 the pair were courting once again. Copulation was observed from 7 January 2007 onwards and the same eyrie was used. On 25 March 2007 prey was seen being taken into the eyrie. On one occasion the prey was a Red Junglefowl. This time the pair had only one chick which was seen at the entrance of the eyrie on 19 April 2007 (right). On 1 May 2007 the fledged juvenile was flying around strongly within the vicinity of the limestone hill.

You may be interested in viewing a clip of the Peregrine Falcon nesting in downtown San Jose, US, HERE.

About three years ago, a pair of Yellow-vented Bulbuls (Pycnonotus goiavier) built a nest in... 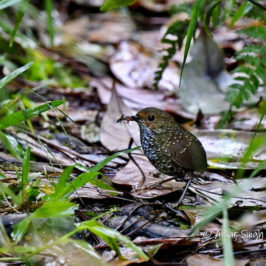