Birds that nest in the open are generally dull looking as they need to blend in with the surroundings, least they become easy prey to predators. The female especially are thus brown and streaky in appearance. On the other hand those that nest in cavities can afford to be colourful, especially the females. They would thus be relatively safe when they are nesting.

This was what I read. So I went about looking for examples.

The Little Tern (Sterna albifrons) (left top) and the Malaysian Plover (Charadrius peronii) (left bottom) are coastal birds whose nests are mere shallow scrapes. Their only defence is the dull white-brown plumage that provide excellent camouflage in the beach habitat. The Large-tailed Nightjar (Caprimulgus macrurus) is another bird that nests on a shallow scrape, not along the beach but among scrub vegetation (right). It is just as exposed to predators but again its camouflage is excellent and one is generally aware if its presence only when the bird suddenly flies off the ground in a flutter of wings when approached. But then it always plays the broken wing game if there are eggs or chicks in the nest to distract the intruder.

Similarly, the Oriental White-eye (Zosterops palpebrosus) (below left) and the White-breasted Waterhen (Amaurornis phoenicurus) (below right), whose nests are exposed, have plain plumages.

Hole nesters are less conspicuous when incubating or brooding. They would not attract predators with their colourful plumages when nesting.

The Collared Kingfisher (Todiramphus chloris) nests in cavities (left top). So does the Red-crowned Barbet (Megalaima rafflesii) (left bottom). The males as well as the females of both these birds are colourful, although some may say that the barbet is the more colourful of the two.

The Dollarbird (Eurystomus orientalis) is also a cavity nester. The bird can be considered colourful. But not the Asian Glossy Starling (Aplonis panayensis, a blackish hole-nesting bird. Or the Javan Myna (Acridotheres javanicus) or even the Eurasian Tree Sparrow (Passer montanus). Of course in nature there would always be exceptions to the rule.

In birds that are sexually dimorphic, where the males more colourful than the females, most are non-cavity nesters. Or are they? The colourful males, besides taking the attention away from the duller and more cryptic females, need the colours to compete with other males for the attention of females. Good examples are Scarlet-backed Flowerpecker (Dicaeum cruentatum) (below left) and Olive-backed Sunbird (Cinnyris jugularis ) (below right). The nests of both are hanging, enclosed structures, rather than open nests like in bulbuls. Not so the Pink-necked Green Pigeon (Treron vernans), whose nest is a plain platform of twigs. The male is slightly more colourful than the female but both are not as colourful as the barbets, kingfisher and other cavity nesters.

Large and aggressive birds can afford to be showy, even when nesting in the open. They can look after themselves. But again, the aggressive crows do not have a colourful plumage… 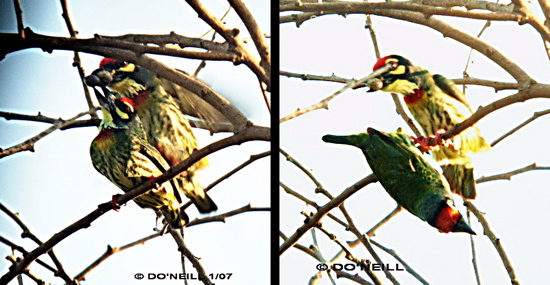