The subject of social-feeding of wild birds remains controversial. While it is not an immediate death sentence to birds ingesting processed or contaminated and often unwanted food, it is good fodder to lend your ears to the voice of pro-bird activists and conservationists in the advocacy of discouraging such a practice.

This discussion was had in Perth sometime ago during my visit at fall. Tourists were seen joyfully feeding swans and ducks with breadcrumbs, crisps and crackers in the ever bountiful landscaped ponds and rivers of Perth city. Theoretically, environmentalists will attest to the fact that as human fingers are not sterile, whatever is handled and fed to birds, especially stale bread mushrooming with fungi, cross-contamination may cause the bird to become infected, sick and eventually death. Yet, the sight of some bird species scavenging in rubbish dumps and bins continues, and seemingly thrive well without any ill consequences (left).

They seem to have the ability to build up body resistance against certain bacteria or develop immunity to these bugs. Species like the House Crow (Corvus splendens) (left top), Common Myna (Acridotheres tristis) and Rock Pigeon (Columba livia) (left bottom) in Malaysia are star examples of such tough, wild birds living off humans’ cast offs in residential quarters.

Conservationists will say, that feeding the wild may cause birds to become too dependant on humans’ handouts and complacent to hunt in their own habitat. But I have seen too when feeding stopped, the birds stopped coming.

Tiananmen Square in Beijing was an exception. It looked barren and sterile the last time I visited in 1998. If a page of China’s history is turned to Mao’s era, one could read about a decree being carried out to exterminate all wild birds for devouring food grains in provincial villages.

Villagers were summoned to carry out a continuous bashing of kitchen utensils, clanking up high decibels, sending birds into frenzy and finally collapsing from sheer exhaustion. Dead birds were removed by the lorry loads. A most primitive and cruel execution, I thought.

Well, the story went on …being bird free; a plague of happy, lucky locusts came and finished the rest of the grains and brought on famine and untold human suffering in China.

Birds in tourists’ cities are luckier. They live off tourists who purchase bird seeds from vendors. Their presence contained within specific areas, symbolizes the maturity and establishment of tourism in that country. It is a win, win situation and everyone goes home happy (right).

Despite signboards being placed in designated public areas, giving instructions to abstain from feeding the wild, yet most tourists ignore them.

‘To give’ is a physical action deriving from the emotional and thought aspect of human beings. Some give freely, others more reserved in whom they choose to give.

A conducive environment that stimulates oneness with nature I believe, plays an important catalytic role to evoke that inner feeling of the art of giving graciously and spontaneously, without expecting anything in return.

I have to confess that I do feed birds when I am a tourist, visiting places abroad, where there are duck ponds or riverside picnic areas. A place where one can find peace, solace and feel the pulse of life in a foreign land. A place, where the breeze is crisp, cool and user friendly to tired souls who are in no hurry go anywhere. While I do observe notice boards abroad, I cannot remember a moment that I’ve ever fed a wild bird under tropical heat like my own country, Malaysia nor have a desire to do so. Isn’t that strange? I remembered only too well in my Danish escapes at Copenhagen with my spouse. We came out from a Danish delicatessen shop with a packet of delicious, mouth melting, freshly baked Danish cookies. We found a delightful picnic spot to enjoy with our flask of hot coffee. It wasn’t long before ducks sailed to greet us happily beside the river (left).

We found so much joy, just to see them free and be captivated by their gorgeous plumage. Their innocent eyes sparkled like crystal clear water from where they bobbled. Their presence was like filling in the last piece of nature’s jig-saw to complete a picture of impressionistic art works of Monet’s Lilly Ponds. The act of offering wild birds a gift of tit-bit came spontaneous and amalgamated a therapeutic feeling of goodness into each soul contributing to that grand picture.

We ended up eating only a piece each of the cookie. The rest and of best quality were enjoyed by the ducks as much as the joy they gave us to share and showed us to give with a generous heart.

This feeling is no different from house owners who live alone in retirement villages, hanging out seed bags and bird feeders in their gardens. The joy of seeing and affectionately providing these chirpy birds, paint rainbows into their somewhat mundane and perhaps, lonely existence.

It is interesting to note that birds from developed nations have the ability to feed freely from bird feeders and seed bags while that of developing countries don’t seemed to know how to tackle them.

Well, I guess while humans evolved at different stages, birds do pick after their habits and require training and time to follow suit.

Bird ecotourism – misconstrued to mean, ‘taking tourists to see wild birds in the jungle’ – seems to be in vogue in my part of the country. Many pages can be written on this subject alone, the misconception it brings with it and the way it is being practiced. Promoting sustainable impact tours, with emphasis on care and conservation of bird environment I believe, would be more appropriate.

The inventor of the word, ‘ecotourism’ is probably in a sorry state of despair now to see his invention, meant originally to be of good intentions, got so twisted by a society that has gone greedy. I can only add, the invented name came too early to our shores. The psyche of our society is not quite ready to efficiently handle profitability with responsibility, within the environmental context.

Let me take you to a hill station in Malaysia and bear witness the impact of social-feeding of wild birds and how bird tourism that is ill understood and handled kicks back.

Morgan the pirate – Common Green Magpie (Cissa chinensis) appears at the predictable time of morning from his usual roost – at the far end of a forest edge. He does his rounds, looking for insects, hopping from branch to branch, landing on bougainvillea pots and picking up fresh breadcrumbs scattered generously and purposely by employees of a resort. Morgan settled onto his favourite perch for an early entrée breakfast (above left).

The mascot bird then took to the balcony to survey some biggies, cicadas that had knocked the daylights out of themselves – having executed a kamikaze act onto the glass doors the night before. In his final approach, he craftily took cover under the driveway of the car park to await breakfast leftovers from in-house guests.

When all clear, the avian pirate swooped into the patio breakfast area, perched on the chair for a ‘quick, look and pick’ as shown by the blurry images (above middle and right). One bird may be cute and well tolerated by the management and guests. What happens when birds come by the dozens? The Long-tailed Sibia (Heterophasia picaoides) is just about the most numerous amongst the various species seen. While they looked contrastingly charming amongst bottlebrush bushes and mopped up most of the breadcrumbs, their gregarious nature when left unchecked was something else (left).

The minute my breakfast was brought in, a flock of them flew in and perched under the patio canopy. Some were bold enough to close in less than ten feet away and perched on table, others on the back of soiled chairs, to watch me eat my breakfast. I had to eat keeping one eye on them.

Let’s zoom in and be introduced to my breakfast avian pals:

“Mmm… shall I be a bit civilised and choose a plate?” asks Percival Sibia (above: bottom left).

“Oi! Percy, why bother when you can have breakfast off the ladle!” retorted Samseng Sibia (above: top left).

“For what we are about to receive, we give thee thanks oh Lord. Amen!” echoed triple Sibias- Sarah, Sylvia and Sharon (above: top centre).

“Hurry up! My turn next and don’t gobble that entire halal yoke!” screeched Abdullah, the Long-tailed Sibia (above: top right).

In flew BigEyes the Chestnut-capped Laughing Thrush (Garrulax mitratus) and perched on my camera bag. He screamed out, “You guys better clear out quick. I got this 82mm barrel pointing at me (above: bottom right)!”

Well… any birding pals care to join me for breakfast with the Avian Jekylls and Hydes in the near future?

All images by Daisy O’Neill.

PS: In Southeast Asia there is no tradition of setting up garden bird feeders as is common in the west. The practice of feeding feral pigeons is actively discouraged in Singapore. At the Singapore Botanic Gardens visitors are feeding fishes in the lakes, and seeing that mynas, sparrows and doves are attracted to the bread thrown into the water, are beginning to also feed these birds. Whether this practice is good or bad for the long term has yet to be debated. The above article provides food for thought. 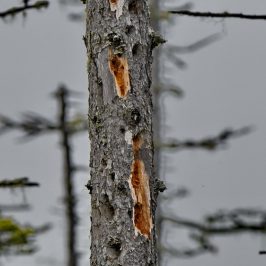 “While in Hokkaido we saw a number of trees that has holes drilled into them....