I stumbled upon a 2003 paper by Kelvin S-H Peh and Chong Fong Lin, that appeared in the Ornithological Society of Japan’s journal, Ornithological Science 2:119-125. I was fascinated by their observations of two fig species and the birds they attract at the Bukit Timah Nature Reserve. The two plants observed were common yellow stem-fig (Ficus fistulosa) (above left) and white-leaved fig (Ficus grossularioides) (above right). The former is a small tree, sometimes planted along roads. It bears large, 25 mm diameter figs in bunches along the trunk and main branches. According to Angie Ng, the figs are enjoyed by bats and squirrels. I have always wondered whether any birds at all go for these figs. The latter is a shrub of forest edge and secondary growth, with smaller, 12.5 mm diameter figs.

A total of 15 species of birds were observed visiting the two species of figs. These birds either swallow the figs whole or bite off pieces. Apparently some birds mash up the figs before swallowing but none of the birds observed did that. Four species visited the common yellow stem-fig, the most common being the Pink-necked Green Pigeon (Treron vernans) (above: bottom left). The others were Asian Glossy Starling (Aplonis panayensis) (above: top left), Black-naped Oriole (Oriolus chinensis) (above: top right) and Great Hornbill (Buceros bicornis) (above: bottom right). Of these birds all are biters except the hornbill who is a swallower. The hornill is a large bird and is the only one capable of swallowing these large figs.

Birds that visited both species of figs were the pigeon, Black-necked Oriole and Asian Glossy Starling. There appear to be more species as well as number of birds that visited white-leaved fig than common yellow stem-fig. Obviously because the figs are small, these birds are capable of swallowing them whole.

The three biters include Scarlet-backed Flowerpecker (Dicaeum cruentatum) (above: top left), Orange-bellied Flowerpecker (Dicaeum trigonostigma) and Short-tailed Babbler (Trichastoma malaccense). These are small birds, the flowerpeckers being less that 10 cm in length and the babbler 14 cm. The swallowers are all longer than 20 cm except the Coppersmith Barbet whose length is 17 cm.

Note: Angie Ng has pointed out that the previous image was not the white-leaved fig. It has been replaced by the current one supplied by her. Thanks Angie. 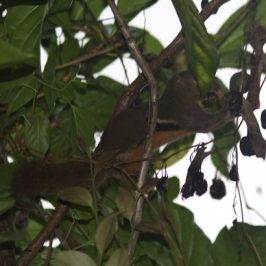 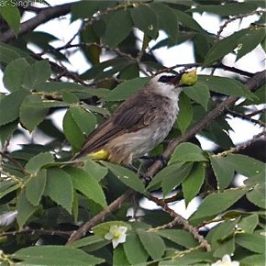 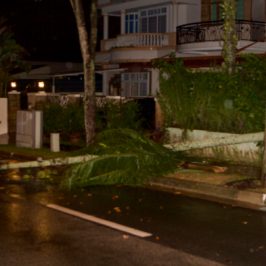