Among birds, siblicide refers to the killing of younger, weaker nestlings by the older, stronger ones through direct attack or by pushing them out of the nest. Parents normally permit such attacks because of scarcity of food. After all, it is better to have two large and healthy chicks than three smaller and weaker ones.

As eggs are laid at intervals of one a day and the parents start incubating immediately after the first egg is laid, it is inevitable that the first chick to hatch will get an advantage over its siblings in terms of size and strength.

Infanticide on the other hand involves adult birds killing chicks of the same species, not necessarily their own. The term parental infanticide refers specifically to the parent birds killing their own chicks.

Most birders are familiar with siblicide. We encounter it regularly among the common Yellow-vented Bulbul (Pycnonotus goiavier). In recent months we have also seen this in the Oriental White-eye (Zosterops palpebrosus). In these cases the youngest of the chicks invariably get pushed off the nest. The Singapore Hornbill Project, initiated by Marc Cremades and Prof Ng Soon Chye (left) using close circuit cameras to monitor the nesting of the wild population of Oriental Pied Hornbills at Pulau Ubin as well as captive birds at the Jurong Bird Park has shown the first ever case of parental infanticide in hornbills. Originally thought to be a rare occurrence, subsequent observations have shown that this is more common than generally believed.

In 2006, one of the nests under 24 hours monitoring at Pulau Ubin showed that the youngest of the four chicks at 4-days old appeared weak but alive. It failed to vocally respond to its mother, so the latter picked it up, crushed it with her beak and tried to feed the dead chick to the others. The remaining three chicks tried to swallow the dead chick but failed until about 30 minutes later when chick no. 2 finally succeeded. The images below show the sequence of the action. For a detailed explanation, I am afraid you need to wait for the publication of the scientific paper, due to appear in the August 2007 issue of Forktail, the scientific journal of the Oriental Bird Club.

Observations made in 2007 showed the practice prevalent in both the wild and captive birds. In both groups, instances of the female hornbill killing the weakest chick were recorded. In one case involving captive birds, there were two cases within the same nest. In one case when the female bird failed to feed the dead chick to one of the living chicks, she swallowed the dead chick herself.

The practice of parental infanticide is probably the first record for a hornbill. And the Singapore Hornbill Project, of which BESG is an official partner, is proud to be the first to report this.

Input and video sequence by Marc Cremades and Prof Ng Soon Chye, Singapore Hornbill Project. Image of hornbill by Chan Yoke Meng and of the two personalities by YC. 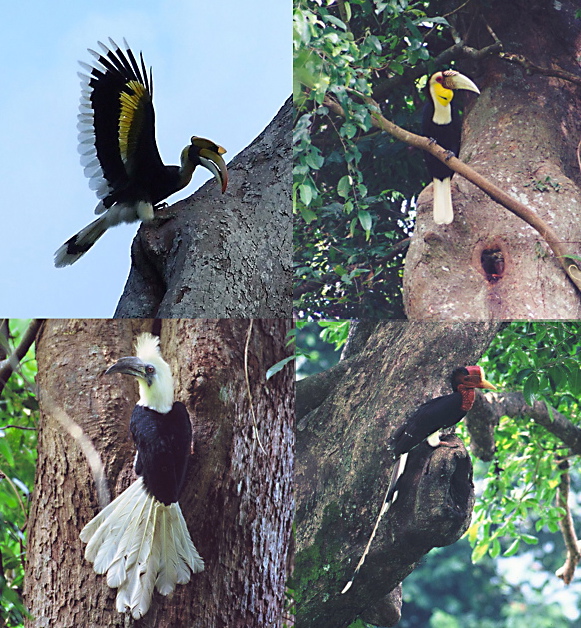