During the last few months we have been receiving images from various photographers of different species of birds taking molluscs as food or as a calcium supplement. We have now managed to identify the molluscs with the help of Dr Chan Sow-yan.

The Oriental Pied Hornbill (Anthracoceros albirostris) nesting in Changi was often seen bringing fragments of snail shells to the female who was sealing herself inside the nesting cavity (left bottom). The snail has now been identified as the Giant African Land Snail (Achatina fulica), a common garden snail (left top). The snail was introduced from Africa a long time ago and is now a pest. Empty shells are commonly found littering the ground in various stages of disintegration.

The Dollarbird (Eurystomus orientalis) was seen feeding an empty Dyakia (Quantula) striata to its fledgling (below left). The Oriental Pied Hornbill was also seen with this snail, but this snail appeared to be alive (below right). This is a native species, common in gardens and the only land gastropod in the world capable of true bioluminescence. And according to Sow-yan, it “was first discovered… for its light value in September 1943 by Mr. Kumazawa (entomologist) at Goodwood Park Hotel, Scotts Road. This snail is normally found in secondary forest, lawns, rubbish dumps, under concrete slabs and also in crevices along walkways especially after rain. Because of this curious and unique luminous character it is probably the most observed species as compared to other landsnails locally.” The Yellow-vented Bulbul (Pycnonotus goiavier) was observed feeding on another land snail, Subulina octona, to its nesting chicks. The photographer Wee Hiang Her thinks that the snails may be empty shells. This is a delicate, translucent, small snail with an elongated and yellowish or creamy shell (below top). It is commonly found in leaf litter and even under flower pots. They feed on decaying organic matter. The Ruddy Kingfisher (Halcyon coromanda) was photographed eating a live apple snail (Pomacea canaliculata) when it made a brief appearance in October 2006 (right bottom). It is an uncommon passage migrant and winter visitor. The bird was seen smashing the snail against the branch it was perching on to get at the flesh. The apple snail is a pest snail introduced from South America and is collected for food in some countries.

A Red-crowned Barbet (Megalaima rafflesii) was earlier photographed eating a forest snail at the Upper Peirce Reservoir forest. The snail could possibly be Amphidromus atricallosus, a largely aboreal species.

Images by YC (snails), Chan Yoke Meng (hornbills, kingfisher) and Allan Teo (Dollarbird). Leong Tzi Ming made the tentative ID of the Amphidromus sp., and Sow-yan is of the opinion that if it is Amphidromus, it could well be A. atricallosus. 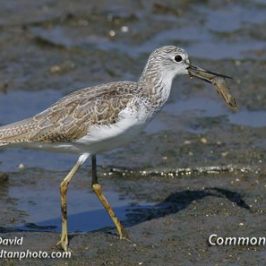