Carolina Wren (Thryothorus ludovicianus) is a common, brightly coloured bird of the US southeast. Pairs are commonly seen in open woods and backyards, where they often duet, the female uttering chattering notes while the male sings his rich musical song.

These wrens mate for life, building their nests in any available cavity, crevice, tree hollow, nest box and other artificial sites. The nest is a bulky domed structure with an entrance on the side. It is made up of twigs, leaves, etc. with a lining of fibres, hairs, feathers and mosses.

Ping Lau, who lives in Washington DC, USA, is a fan of BESG’s blog. Reading the various posts has inspired her to keep records of bird happenings around her home. Below is Ping’s story of a pair of wrens that nested, not for the first time, in her flower pot. “Wrens aren’t choosy when it comes to selecting a nesting site – it seems like any available receptacle will do! This is a flower pot hanging on a wall in a stairwell leading to a basement (left). The wrens have to fly in through a cellar door to gain access to the pot. This pot was used two years in a row, probably by the same pair.

“The first spring, the nest was raided by a raccoon and the eggs were taken but the wrens returned this spring and made another nest in the flower pot. I first noticed the nest in mid-April when the trees were still bare and night-time temperatures were still dipping below freezing. I think the activity may have been temperature dependent as work went very, very slowly during the cold April days.

“The eggs were laid about the second week of May when the weather had warmed up. There were five eggs laid and four hatched (above).

“The adults flew in and out the cellar door dodging two big dogs to feed the nestlings and they grew fast (left). They left the nest today, the 30th of May, but there were only three survivors. Two of them fell into the dogs’ water dish that was a little distance under the nest and I did not find them immediately. One was drowned but I was able to revive it’s sibling by warming it in my hands and gently rubbing it. After drying out in the sun, it manage to fly!

“The three surviving chicks then hopped about and made short flights with the parents keeping a close watch. I couldn’t get a picture of the adults as they were too quick and shy but the last picture of the babies look very much like the adults with the characteristic white ‘eyebrows’ (left bottom).

“I hope they’ll be back in the flower pot again next spring!” 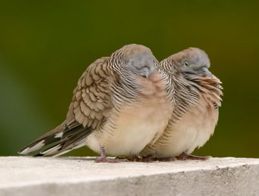