In many rural villages in Malaysia, and for that matter, probably in all Southeast Asian countries (and Singapore is no exception), fledglings of birds that fall accidentally from their nests are rescued and cared for. They can then become cage birds, to be had for a few dollars. In many cases, especially if the rescuers are caring, the fledgling will be looked after if injured, to be eventually released. Owls may be prized for their unusual looks, the superstitions that go with them, etc. and the fate of a displaced fledgling will be in the hands of the resucer…

An earlier post describes the situation in villages. Now, KC Tsang, just back from a trip to Johor in May 2007, brings a tragic story of a Spotted Wood Owl (Strix seloputo) juvenile encaged and ready to be sold.… “I have found another sad tale to tell. Last weekend I was having a relaxing weekend with the family at Sedili Besar, Johor. I was walking around Kampong Sedili Besar with my camera hoping to catch something interesting when the kampong kids came up to me saying “Inche, ada burong hantu, ada burong hantu di sanar” [Mister, we have an owl over there]. So they led me to this beautiful Spotted Wood Owl juvenile in a cage. As you can see from the picture, his beak had been bruised as he rubs it against the chicken wire cage trying to find a way to escape (above).

“The person who caught the bird is Inche Dollah, and the kids told me that it was up for sale. But I decided not to have anything to do with encouraging the man to trap more birds, so I told them I had no interest in buying it.

“As the bird is not in Singapore I do not think we can do anything to save it, but hope the Malaysian Nature Society (Johore Branch) can do some about it.

“The kampong folks told me that the parents still comes around looking for the juvenile in the evenings.”

Note 1:The Spotted Wood Owl is totally protected in Malaysia under the Protection of Wildlife Act 1972.

Note 2: If you find a chick that has fallen from its nest, place it in a safe place away from possible predators, like on an elevated platform. Do not remove it away from its nesting area. The parents will eventually find it and look after it. If you find a displaced chick in your garden, place it in a shoe box, for example, and leave it somewhere that the cat cannot get at it until the parents claim it. In the night, cover the box to keep the chick safe – see what Margaret did when she found a displaced Spotted Dove (Streptopelia chinensis) in her garden.

This is Kennie Pan’s sad experience with a pair of nesting Olive Backed Sunbirds (Cinnyris... 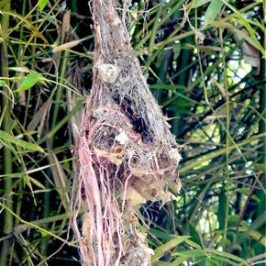 “The builder of this nest must be doing it for the first time. “I was...