As Tang Hung Bun was walking along Jalan Keli in the late afternoon on 16th April 2007, he spotted a bird flying towards a clump of palms (left bottom). The bird was not behaving normally and this made him curious. It was a Coppersmith Barbet (Megalaima haemacephala) and it was about to enter a hole in a tall, slender trunk of a dead lipstick palm (Cyrtostachys renda) (left top). It was obviously nesting.

He kept close watch for the next four weeks, documenting the nesting with his digital and video cameras – see his webpage.

Coppersmith Barbet is a common colourful resident bird. Most of the time it is found around the tree canopy, often heard but seldom seen. It likes to perch high up on a branch, where it utters its repetitive tonk that sounds like the beat of the coppersmith’s mallet, thus its common name.

The bird excavates a cavity in a semi-rotten tree trunk or branch where the female lays her eggs. According to Madoc (1956) it excavates more than one cavity, using one to lay the eggs and the others to roost at night. The Coppersmith roosts singly, unlike other species where two or more may roost in a single cavity.

Hung Bun managed to distinguish the sexes, although sexual dimorphism in barbets is not strongly marked. According to him the male has a richer red patch across his breast. He believes that there were at least two chicks in the nest. Both parents fed the chicks mainly with fruits, probably figs. Feeding was somewhat interesting. The parent bird flew in with up to three figs in its beak (above left). Arriving at the nest, it looked over its shoulder just once before poking its head into the nest cavity to feed the chicks. Withdrawing its head with a remaining fig, the bird nervously looked around – left, right and left again, checking to see if everything was alright. With a last turn of its head to see whether it was being followed, it poked its head in again. By then a chick had lost its patience and stuck its head out to receive the fig (above right).

After a few visits the female was seen entering the nest immediately after feeding to emerge with her beak full of wastes. Poking her head out, she paused for a while before flying out to dump the waste away from the nest (below). The male was not observed doing this chore. Both parents were observed picking ants from the nest. Just before the chicks were about to fledge, they would vigorously peck the breast of the parent after a bout of feeding.

On 11th May, 25 days after he first spotted the barbet entering its nest, Hung Bun recorded on video a parent bird trying very hard to pull a dead chick out of the nest. With its beak firmly clamped on the dead chick’s head, it managed to partially pull it out. Only the head was out, but the body was still hanging inside (below left). The bird flew out to return and tried again. Perched firmly on the outside of the nest, it again tried pulling the body out by the head. Again it failed. It flew off again to return with renewed energy (below right). This time it managed to pull the dead body totally out and let if fall to the ground below. The chick was at an advanced stage of development. The questions that need to be asked are: What caused the death of the chick? Was it killed by its sibling? By one of the parent birds? Can space constraint triggered the killing of the chick? After all the stem of the lipstick palm is 7.5 cm in diameter and the palms where the birds were nesting appear to be more slender than normal.

Another possibility was predation by snakes, squirrels or whatever.

The next few days the parent birds did not fly directly to the nest as was the case before. Instead, they perched on a nearby branch for some time before approaching the nest. This was obviously to encourage the chick to emerge. On 15th May the surviving chick finally fledged. It poked its head out of the nest entrance, stayed that way for a few minutes (right). All the time it was calling softly. It then flew to a nearby tree, continuously calling to its parents. The next day the fledgling was not seen nor heard. It must have flown away with its parents. 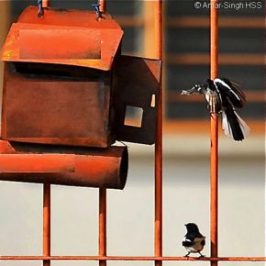 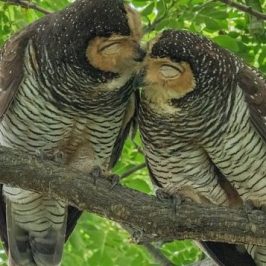 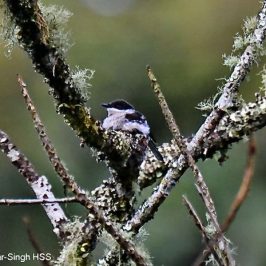