On 23rd April 2007 I received a couple of interesting images from Heng Fook Hai (left). At the Changi boardwalk he noticed an Asian Glossy Starling (Aplonis panayensis) flying into the hollow top portion of a palm post and emerging with what looked like a fig in its bill. Fook Hai was intrigued, and so was I.

The hollow tops of these posts are favourite nesting sites of Dollarbirds (Eurystomus orientalis). The starling was taking out fruits rather than bringing them into the hollow portion. So it was obviously raiding someone’s larder, possibly the Dollarbird’s. And Dollarbird does indulge in courtship feeding. But does the male Dollarbird places fruits inside potential nesting cavities to persuade the female to enter it and lay her eggs? Birders have yet to report on this behaviour.

Subsequent images sent in by Meng and Melinda Chan helped solve the mystery. They noticed starlings flying above to swiftly dive into openings at the tops of palm posts with food in their beak. After a few minutes these birds emerged with what must be seeds for disposal. The images on the left show a bird dropping the seed into the sea below.

The birds were obviously nesting at the top of the semi-rotting posts sunk into the seabed. They were feeding their young, bringing in fruits with large seeds. It is possible that the young swallow the fruits to regurgitate the seeds and the adult then remove them. Adult starlings regularly swallow palm fruits and regurgitate the seeds. 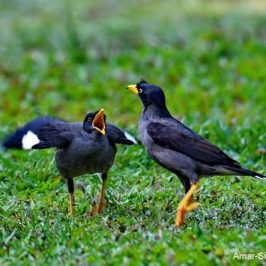 Photographer Wee Hiang Her captured a couple of shots of a Yellow-vented Bulbul (Pycnonotus goiavier)...