On morning of 6th May 2007, KC Tsang and Amy came across a poacher’s trap while out strolling at Changi Point (left). “…and at about 0800 hrs came across this poacher’s trap. It has an Oriental White-eye (Zosterops palpebrosus) inside to act as a decoy, and the trap has two compartments in which to trap the unwitting bird. It was suspended about twenty feet above ground from a branch of the tree.

“The trap is located at the bottom left hand corner of the Changi Beach Club, if you are facing the sea from the club house. Below the trap is a Hill Myna (Gracula religiosa) in a cage.

“So what can anyone do about this?”

Oriental White-eyes are still a popular cage bird among the Chinese and the Malays. The latter call the bird mata putih, meanging white eye. Does this attempt at trapping the bird indicates that there is a well-organised syndicate at large as suggested earlier? The bird is getting common and actively breeding (1,2,3). Trapping it should be strongly discouragerd.

As in our earlier posts on Straw-headed Bulbul (Pycnonotus zeylanicus) (1, 2), the public should contact the Agri-Food & Veterinary Authority of Singapore (AVA) during office hours as follows : However, Fang Sher Chyet has written: “The problem with AVA is that they are not working on Sat and Sun, and most of these poachers are active during the weekends. I have e-mailed them poacher activities at Jalan Halus with poacher’s photo and traps (above), but I did not hear from them even after follow-up e-mails. Till today, I still see poachers (sometimes 4 or 5) at Jalan Halus.” 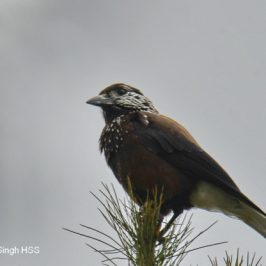 The Changeable Hawk-Eagle (pale morph) (Spizaetus cirrhatus) is a protected wild life species under the...