Red-breasted Parakeet (Psittacula alexandri) (above left), a feral resident, is breeding and making its presence felt. Slowly but surely, it is replacing the resident Long-tailed (Psittacula longicauda) (above middle) and the other feral, Rose-ringed (Psittacula krameri) (above right). The bird was first recorded in 1943 as a feral species, after which there were more sightings. However, there were no reports of breeding until the 1980s.

Parakeets usually pair for life. Courtship occurs mostly around nest entrances or in trees nearby. This may take the form of allopreening. The birds nest in tree cavities and several pairs may nest in the same or nearby trees. They often make use of nesting cavities once used by woodpeckers and barbets, frequently enlarging them before use. Three to four eggs are laid on a layer of wood dust at the bottom of the hollow.

A small colony of Red-breasted has established a permanent nesting site in Changi Village among the old angsana trees (Pterocarpus indicus) along the main road. The image on the left shows a nesting pair, with the male perching outside and the female just emerging from the cavity.

The male is a possible nominate P. a. alexandri but the subspecies of the female is questionable. Why? Her lower mandible is black while the upper is partially black. The female of this subspecies alexandri has coral red bill.

The images above show a chick in the nesting cavity being fed by a female Red-breasted. The chick peeping out of the nest cavity (above left) has red bill, as is the case with this subspecies. However, the female has coral red upper but blackish lower mandible (above centre and right). This is very unlike the female in the other image.

In a further posting, the subspecies of the Red-breasted will be further discussed. 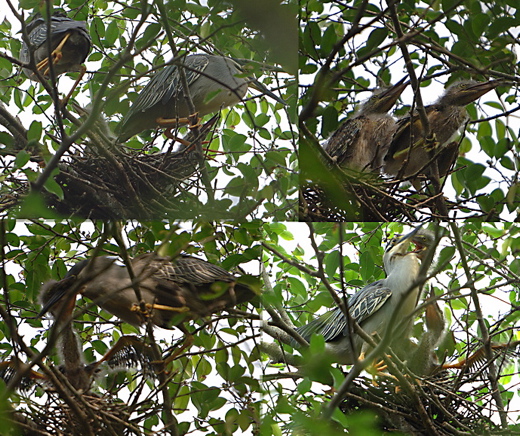