The Black Baza (Aviceda leuphotes) is a relatively common winter visitor. The opportunity to examine it closely came when an injured bird was picked up by Alex Koh and nursed back to health to be subsequently released (left).

This is an easily recognisable black and white raptor with whitish underparts lined with black and chestnut bars. As with most raptors, the underparts are paler than the upperparts, making the bird less conspicuous when viewed from below.

The head is distinctly black, at the back of which are a few long black feathers that make up its erectile crest. The function here is probably simply display. With Jerdon’s Baza (Aviceda jerdoni) the crest feathers are white-tipped. When raised in alarm or in threat display, they are more conspicuous, especially when the feathers are totally black. The purplish brown to reddish brown eyes are placed on the sides of the head. They are large and round and protected by a bony ridge projecting from the skull above (right). This, together with the nictitating membrane, help protect the eyes when the bird dashes into the vegetation after prey.

Because the eyes are almost immovable in their sockets, the bird must turn its head to obtain binocular vision. To see behind, it must swivel its head on the extremely flexible neck. In fact the bird can turn its head up to 180 degrees (top). The basal part of the upper mandible is covered with a bare, fleshy, waxy membrane, the blue-grey cere, through which the flattened nostrils open (above).

Black Baza hunts from a perch. It may fly out to snatch a prey, dash to and fro when there is an insect swarm or a flock of roosting passerines and even plunge into dense vegetation. The bird is most active at dusk.

Text by YC Wee and images by Alex Koh. 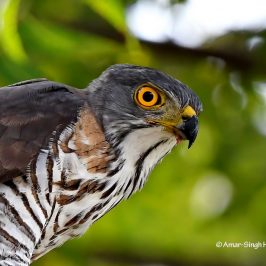