Birds roost communally for a number of reasons. Coming together reduces their vulnerability to predators. And roosting in a central location allows for information exchange regarding feeding grounds. Roosting also enhanced protection from the weather.

Barn Swallow (Hirundo rustica) has a worldwide distribution, breeding throughout North America and from Europe eastwards to China. It migrates in large flocks southwards. The birds that we see in Singapore possibly come from eastern Asia (above). Many are juveniles, with a duller plumage and a less distinct breast band.

According to Chris Hails (Birds of Singapore, 1987, Times Editions), they can be seen in almost every month of the year but scarce in June. However, they are more numerous during August-April. In Peninsular Malaysia they can be seen in towns roosting on high tension wires.

Dr Wu Eu Heng and YC were at Yishin Street 71 in November 2005 to experience the roosting of masses of Barn Swallows on pulai trees (Alstonia spp.) along the road (above).

Individual birds grouped at pre-roosting sites nearby before moving on to roost communally. At around 6.30 pm the birds began to arrive (top). They could be seen flying from all around, to suddenly arrive amidst the flutter of wings and chirpings. They came in waves after waves, to land on the branches of the trees. Upon arrival there were much flying, chasing and vocalisation as individuals vied for choice roosting positions.

By 7.00 pm they had all settled down and quiet returned. It was quite an experience to be there, bringing back memories of Alfred Hitchcock’s 1963 movie, The Birds.

Early next morning the birds would prepare to fly off to their foraging grounds. This would involve another bout of squabbling before they fly off just after sunrise.

The noise they generated sent residents up the wall. Not to mention the droppings that they left behind. During bad weather the birds would congregate along the corridors to add on to the nuisance. Naturally there were numerous complaints and this resulted in the Town Council sending workers to trim the trees. This had limited effect on the roosting birds, but then there were other trees around for the birds to roost.

Over at nearby Chong Pang, the Purple-backed Starling (Sturnus sturninus) roosted in the sea apple trees (Syzygium grande) lining the road (above). As with the Barn Swallows, these starlings arrived after 6.30 pm in waves, gathering on certain trees before finally moving to the sea apple trees. Many of these trees were earlier trimmed to discourage the roosting of these starlings. So the birds moved on to those trees that were not trimmed. They obviously preferred full foliage trees for better protection from predators and the elements. Input by Dr Wu and YC, images by YC. 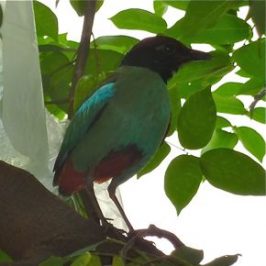 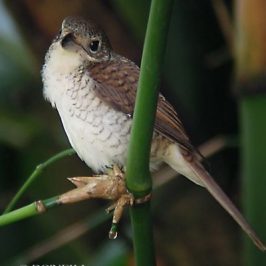