Sometime in November 2006, KC Tsang posted the image on the left (top) and noted, “We need a forensic expert here to find out who was the victim of this very explosive feeding frenzy. And who is the possible perpetrator of this crime most foul? Scene of the crime, not in KL, but in our very own backyard.” Note that the above consists of different feather types that lead one to conclude that the bird was a victim of a predator. Was it a cat? A raptor? The jury is still out.

My experience during November 2006 was different. I kept finding in my garden and driveway a large number of most probably belly feathers (left bottom). I have not seen them before, maybe because I did not look closely or because they were not around.

My guess was that the feathers belonged to the Pink-necked Green Pigeons (Treron vernans) that were around my pair of ceram palm (Rhopaloblaste ceramica). This was the time of the year when these pigeons regularly perched along the midribs of the palm fronds in the early mornings and late evenings.

At first I thought a pigeon might be victim of a predator and the scattered feathers were evidence of what happened. But then there were no other types of feathers around. Then the possibility of moulting came to mind. Intrigued, I sent an image to our field ornithologist, Wang Luan Keng for her opinion.

Her reply: “Those are not pure down feathers but semiplumes and they are the belly feathers of the green pigeon. The distal part of the feather helps to fill up the contour of the bird where the downy part is mainly for insulation and are covered by the feather on top. These belly feathers are quite loosely attached to the bird and can drop out easily – an adaptation to scare predators. These pigeon feathers that you found underneath your palms may not be due to moult.

“Birds do have a period to moult, usually after their breeding season. In Singapore, most birds breed from Feb/March till July/Aug, maybe Sep. Many species here overlap moult and breeding slightly so they will start moulting in July/Aug and end by Oct/Nov when the NE monsoon starts. Many species, especially passerines, have straight forward sequential moult; others like cuckoos, hawks, herons, fruit doves etc have very complicated multiple moult series and yet some species like rails, grebes and probably bitterns moult all feathers at once and go flightless during that period. And mind you, we are only talking mainly about primary feather moult. We know even less about other flight feather moult and almost nothing about body feather moult.” 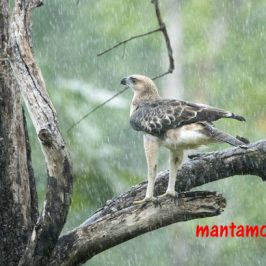 “We expected rain but didn’t expect such a heavy rain when we decided to come...