There are several species of birds in Malaysia that are often seen flying in pairs. Some pair for life, some for several seasons and some just a single season only. The Yellow-vented Bulbul (Pyconontus goiavier) is just about the most frequently seen paired resident species in my area and this particular pair catches my eye for some particular reason (below). They became frequent visitors and nesters in my private garden balcony the last few years that we decided to name them Laurie and Laura. The birds took up residence besides a family of White-rumped Munias (Lonchura striata). Every hanging fern species that thrives in the balcony carries a nesting history. Some of the nests were made over from previous season. Last year, no nesting was observed. While the environment remained peaceful and conducive to raising their brood, Laurie and Laura did not bring in any nesting materials. I began wondering why and soon found out.

Since last September 2006, tinkling sounds, ‘tink.-tink-tink’ were heard coming from the driveway. Initially I passed then off to be a dribbling garden tap with droplets of water hitting a hollow tin can. It continued intermittently during the daytime and for several consecutive days until the sounds got into my nerves’ edge and I simply had to investigate.

A fascinating and entertaining observation of endearing avian showmanship followed. It was Laurie, the male Yellow-vented Bulbul who flew into the driveway and became fascinated with the winged mirror of my parked vehicle (above). He perched and stared so hard onto the shiny chromed mirror as though to say, ‘I wish, I wish… mm… Am I the most handsome guy in town?’ Laurie was not alone. He flew in with Laura but she decided to take to a more discreet and observation perch on the Christmas tree, about 15 feet away. Laurie with his broad and black loral stripe, stared into the mirror and saw another competitor, a look alike and furiously began pecking vigorously at the chromed mirror. He was pecking at a brown feathery bird – his own reflection!

Over the period of weeks, Laurie became extremely obsessed with the winged mirror – his competitor. He continued relentlessly to impress Laura and showed off his skills of showmanship by roll flying around the mirror, performing balancing tricks, tap dancing and doing the flamenco, ballet and butterfly stance to just name a few (above). He was working and trying very hard to be the hero. Occasionally, Laurie would pause to await and listen for the approval of ‘Bravo! Bravo!’ coming from Laura’s chirping calls (above). Laurie would courteously give a bow showing his broad striped dark crown and threw a deep side glance at his ‘competitor’ as if to say, ‘Hey! This is my territory and that’s my gal, so clear off! Laurie did not fail to soil the mirror to get the message over and would end his performance by shining his yellow vent at my scope to ensure I did not miss out his bright rear plumage (above).

Is this a kind of challenging courtship display or is Laurie a weirdo with an obsession?

I wonder if Laura is tired of seeing Laurie’s repeated performances. He was unperturbed by the family’s pet dog who had seen them all and more often than I had witnessed. She would just lie in the garage, her right ear cocked up and eyes rolled to the rhythm of Laurie’s performances just 8 feet away. At times, I could hear her sighed aloud as if to say, ‘Oh, for heaven’s sake not again, bird!’

My camera certainly did not give up that easily but provided additional silhouette shots through my spotting scope to look like an evening performance of a Yellow-vented Bulbul, romancing his beau with a repertoire of courtship tap dancing! I found out these birds disliked my ornamental Chinese bronzed bells with red tassels hung in the balcony garden, beginning of last year. I had them removed recently. Soon enough, they both flew in to prospect a new nesting site.

Check out our earlier postings on how birds react when they see their reflections on a mirror: (1 and 2). 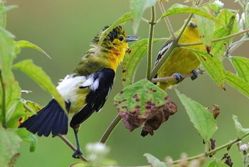 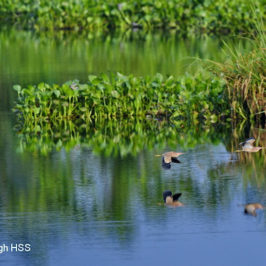