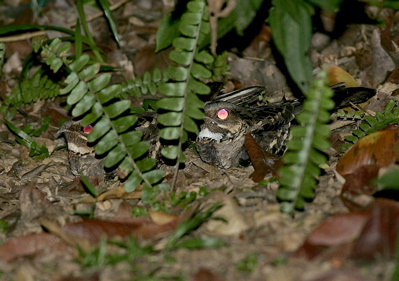 Meng and Melinda Chan were out on the evening of 19th November 2006 hoping to take some romantic sunset scenes when they happened to witness a scene that few birders are privileged to see.

Just after dusk they heard the nightjars calling away. Then suddenly they saw one bird flying from a low perch towards the ground, to disappear in the undergrowth. Meng went forward to take a closer look. The nightjars were mating, with one mounting the other and then both wobbled away.

By the time he got his camera and flash ready, the nightjars had already finished their business. He only managed to get images of both birds quietly sitting side by side – after the event of course (above).

So it dawned on them that nightjars mate during the night.

I suppose they do mate during the night. As well as do everything else. After all, they are nocturnal birds.

As with all or most nocturnal birds, the breeding behaviour of nightjars remain little known. From whatever that have been reported, we know that these birds indulge in aerial courtship displays involving showing off their various white markings on the wings, making wing clapping sounds and sometimes even vocalisation. Copulation often follows a successful display. 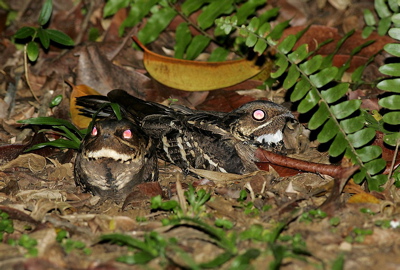 Our bird specialist R. Subaraj helped identify the birds in the images and reports: “Yes, they are Large-tailed Nightjars (Caprimulgus macrurus). I would say that the one on the right is a male (large white throat patch) but the one on the left is a bit more challenging… probably an adult female, based on the large but buffy throat patch. Other features, such as the size of the wing patch and the amount of white in the outer tail feathers, are not visible here.” 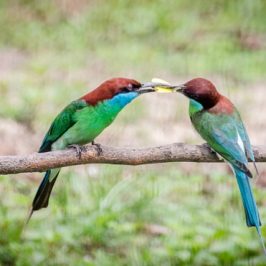 Following the collapse of the old albezia tree (Paraserianthes falcataria) at Eng Neo, the pair...