The plumage of the Little Tern (Sterna albifrons) during the breeding season shows a prominent black cap on the head and a yellow bill tipped with black (above). The plumage of the juvenile is distinct from that of the adult (below). Normally all the birds would be facing the persistent wind direction, be it morning or evening. Hence, the adults always got into a bit of trouble positioning themselves for landing in the mornings. Fish was sometimes dropped as a result. Passing on the fish to the juvenile were mostly done without problems in the evenings. The juveniles were normally near-hysterical whenever the parent arrived with fish (above). They would wave their wings to attract the attention of the arriving parent. The other juveniles normally remained patient and waited their turns. The parent that was keeping an eye on the juveniles would then fly off to get food for the other chick. Should the other chick managed to snatch the fish, the rightful chick would normally chased it around until the fish was dropped and retrieved it. Originally the chicks were fed with bits and pieces of fish. As the chicks grew they were slowly fed the entire fish caught by the parents (above). The parent bird would hold the fish just behind the head and direct it into the gaping mouth of the juvenile, head first. This would prevent the sharp spines of the fins damaging the throat as the fish slithered down the throat into the stomach. With a larger fish it was not possible to place it inside the gape. The juvenile had to receive the fish, gripping it just below the head. It then had to manipulate the fish so that it was swallowed head-first (below). Courtship feeding, as described earlier (a, b) continued throughout this period when the parents were continuously feeding the juveniles.

Note: The complete account of the breeding ecology of the Little Tern has been published in the online journal, Nature in Singapore. A PDF copu is available HERE. 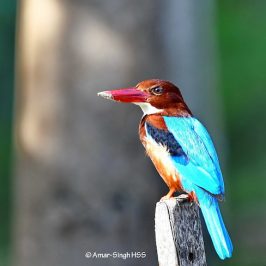