This is the continuation of the earlier Part 1 account of North Borneo’s Best Kept Avian Passage. The image above of the Oriental Pied Hornbill (Anthracoceros albirostris) in flight, viewed from below, is a prelude of the many avial delights to come. The group was floating down Sungai Kitabatangan towards its tributary with S. Menanggol when things got exciting. As Daisy continues with the story…

Then, hell broke loose and the jungle came to life with the howls of Bornean Gibbons (Hylobates muelleri). 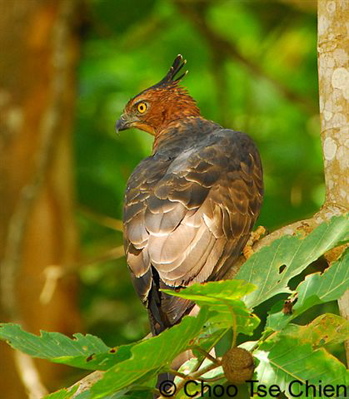 The trilling signature calls of the Common Kingfisher (Alcedo atthis) (below top) and the Blue-eared Kingfisher (A. meninting) (below bottom) taught us to play ‘hide and seek’ with them and Wong became such an expert at their games.
.
. They provided us some very exciting moments in bird photography at its best, thus could justify this river tributary to be nicknamed, ‘Kingfishers Avenue’.

Bird-photography from a moving boat in Sukau can be said for us, for now… to be most challenging. Where photographic skills, patience, maturity, self-disciplined and integrity of a bird-photographer are all severely tested and self-evaluated.

A good range of photo equipment were also put to tests. While my hand-held, miniature Coolpix P4 picked up decent scenery images on ‘Active VR’ mode in a moving boat, Nikon’s D200s were coming out with some very commendable shots, Cede’s D2XS had to be superlatively described!. 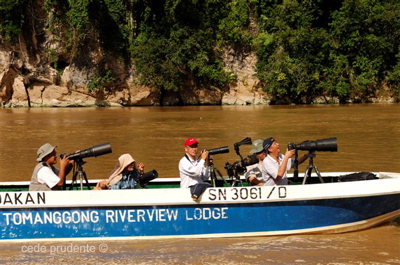 The sitting position was well organised with Chien sitting in front for balance. Winston and Wong just behind and shared a bench. As a birder, I had the whole bench to myself, engaging in a 360 degrees x50 magnification view from my Meade telescope, with the added luxury of a backrest for a lady. Cede stood and sat behind with his 600mm ‘big gun’ and when raised showed the prowess of his lens and the pro-photographer’s silhouette caught in my Coolpix P4 (above).

At times, my 10×42 binoculars would scan for our feathered friends or followed flight paths of birds to alert the squad team.

When opportunities arose to photograph the birds, there were much seriousness and intense moments. Nobody breathed, everyone including the boatman stayed totally focused on the subject.

With Cede giving out camera specifications to the front 300mm ‘gunners’, Chien and Wong responded by, ‘click!click!click!click!’ Winston’s Minolta went, ‘click…click…click’. Behind my ears, the turret of Cede’s 600mm was explosively firing away, ‘Pap!pap!pap!pap!’

My Meade telescope went into silent scope mode when digiscoping a bird on the move was concerned. I had it temporary downgrade to disuse inventory as, ‘Step-mother’s Themos Flask.’ 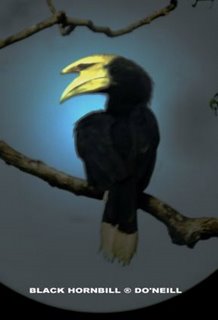 However with lots of persistence, patience from team mates, I had much enjoyment to challenge what the scope was not designed to do – focusing an image on a moving platform. I did however, manage an identifiable Black Hornbill (Anthracoceros malayanus), photoshopped to death in silhouette! (left).

The Lodge has a friendly and relaxed atmosphere, with balcony views of the river and hill forest; a quaint patio area to read in quiet, write or simply sit and just reflect upon the past, soul search and perhaps… catch a glimpse of the future reflected from the waters?

Asian cuisine was specially catered to our palate. They were substantially provided and well received. Considering that fresh supplies had to be brought in on a regular basis, the catering far exceeded our expectations. The curried prawns were simply so fresh and delicious! 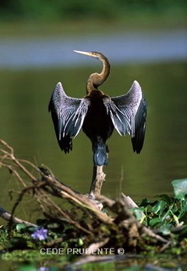 The Oxbow lakes added more bird and mammal species to our sightings. In addition to the various species of egrets, we finally caught up with the Darter (Anhinga melanogaster) at this final frontier (top left). They received us in various poses. Many more were seen perched high on forests’ stumps (below). We chanced a rare flighty glimpse of the endangered species – Storm’s Stork (Ciconia stormi) currently being scientifically researched (top right).

Chien’s acute sense of smell trailed the presence of the endemic Proboscis monkeys (Nasalis larvatus), for their odour of urine was unmistakably musky, sweet-sour. There were packs of them and they were seen leaping from tree canopies and at river crossings. The patriarch of the harem with his endowed genital and huge pendulous nose was the favourite with photographers (below). 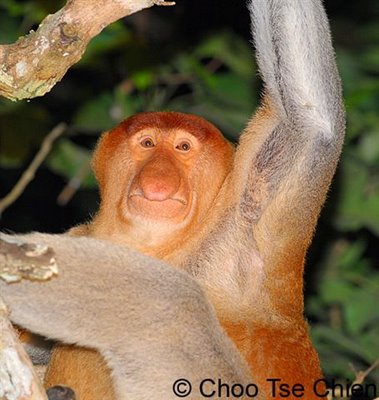 I say, a Night Safari would be considered one of the highlights of the expedition; where Buffy-fish owls (Ketupa ketupu) were seen in abundance, including a rare observation of a courtship display of an inexperienced male (below). I wished and wished for another owl species, while laying on the bench, looking into the night sky of more than a million stars and enjoying the slumber drift of the boat, in the serene of the night. My wish was granted with the visual of a skittish Barred Eagle Owl (Bubo sumatrana).

Various species of daytime birds were seen resting or sleeping at night. We finally caught up with a pair of resting Black-and-red Broadbills. They were high on our wanted list and we allowed ourselves restricted shots only (below). 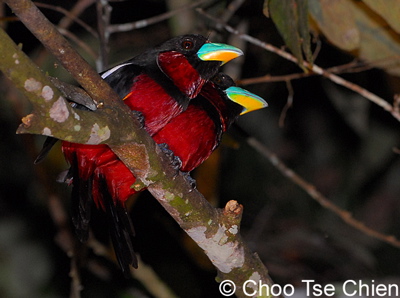 My personal evaluation of a Bird Night Safari at S. Kitabatangan is that of a very specialized expedition, suitable for maturing bird-photographers only (below). It is a bird-photography expedition not to be taken lightly and done too frequently. It is a personal challenge, needing a great deal of self-discipline, integrity, righteous conscience, putting welfare of birds first and a healthy attitude towards wild life, environment and conservation would one really find and feel the true meaning and joy in this expedition. 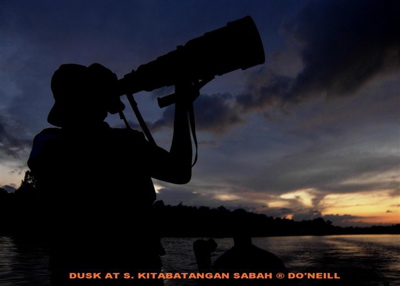 I am please and proud to say the team did well. As a birder first, photographer second, so was my duty to remind myself, the need to advocate respect for birds and led the conduct of good birding ethics.

Taking on a bird safari at S. Kitabatangan and not cast our eyes on other wildlife within this narrow corridor of the Bornean forest would be myopic indeed. For besides the presence of Red Leafed and Silver Leafed Monkeys, Long-tailed Macaques (Macaca fascicularis) and Pig-tailed Macaques (Macaca remestrina), only in N. Borneo and Indonesia would one have a dwindling chance to observe Orang-utans (Pongo pygmaeus) in the wild. 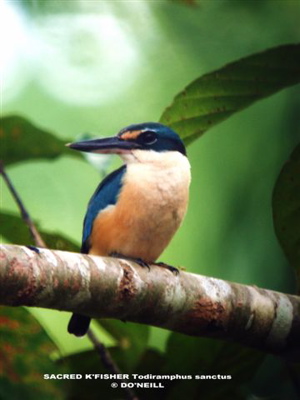 The dawn of the third day was spectacular without the mists. It was our last day together. By lunch time, I was seen to be missing. I had the urge to bird alone earlier in the village. My digiscope had picked up an accidental vagrant – Sacred Kingfisher (Todiramphus sanctus) from Australia and unrecorded before in Sukau (above).

The Sacred Kingfisher turned up to be the star bird of the trip. It made all the difference to this so enjoyable, relaxing and exciting expedition and we believed it was God sent for many good things to come for all of us.

We parted ways at Sukau Tomanggong Riverside Lodge. We left knowing in our hearts, the call of the wild was simply intense and irresistibly beckoning.

It wasn’t going to be ‘Goodbye’ but ‘See you again’ … next year! 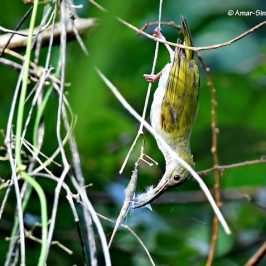