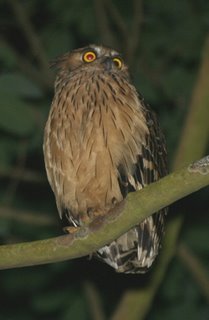 James Heng brought back this account from his birding trip to Bach Ma National Park, Vietnam earlier this year:

“The ranger informed me about this pair of Brown Fish Owls (Ketupa zeylonensis), a cousin of our Buffy Fish Owl ( Ketupa ketupu) (left), that has been nesting at the same pillar at the gates of the park for several years.

“The pillar is about 4 m high, and is beside the road leading up to the summit. A small number of people use the road so the owls tend to hide amongst the large leaves of the trees to avoid detection. I’ve not seen them yawn even once when they are wary of people at that spot.

“But by mid-morning though, one would fly to a nearby branch about 3 storeys high where it feels safe. On that perch, it’s eyelids will tend to droop and it begins a whole series of yawns before dozing off.

“After watching it yawn several times, I began to yawn too! It was really amusing.

“Hmm, wonder if the reverse it true – if we yawn repeatedly at them, would they yawn too?”

Now why do birds yawn?

Yawning may sooth an itchy throat. Maybe they yawn for the same reason we do, because they are sleepy. Or there is a need for oxygen intake. The yawning is most often triggered when one is tired. Yawning is common at night as our bodies prepare for sleep. The presence of foreign materials in the throat may induce yawn-like actions. 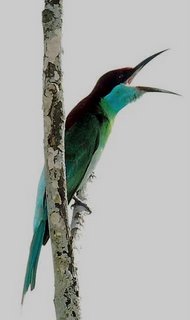 There are those who believe that yawning in birds help remove excess heat.

Very little has been studied on the sleeping habits of birds. We generally assume that, like people and other warm-blooded animals, they sleep when they are tired and full of food. And when they wake up, they yawn and stretch before flying off to forage.

Now, is the Blue-throated Bee-eater (Merops viridis) on the left yawning? Most probably not. Maybe it is casting a pellet?

If you need to see a Buffy Fish Owl yawning, go to our earlier posting.