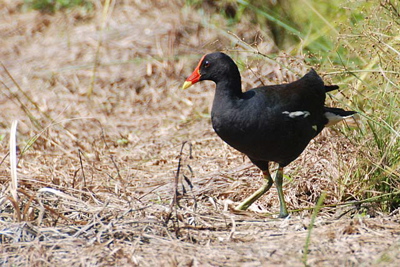 The Common Moorhen (Gallinula chloropus) is a bird of wetlands. It is easily recognised from its red bill and prominent shield against a blackish plumage (above). The juvenile is dark brown and pale below, with an olive bill and without the prominent shield (below). 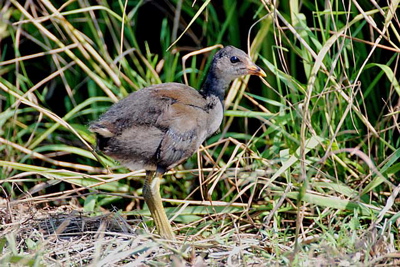 Allan Teo recently spent over three hours in a rice field in Malaysia observing a family of Common Moorhens. Enclosed within his cameo sheet hide and comfortably seated on his field chair, he set up his equipment and waited patiently for the family to reappear. His camera was directed at the exact spot where the birds were earlier foraging, but went into hiding among the rice plants when he appeared. 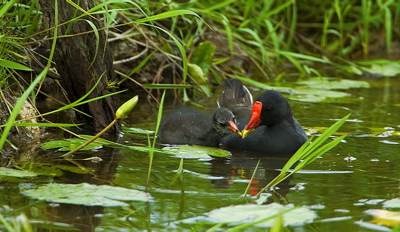 The parents were always on the lookout for danger, especially from the many raptors that roamed the sky above. Besides, there were also other predators among the paddy.

As Allan recounts, “It took about 20 minutes from my arrival and installation of the hide before the parent birds reappeared. They cautiously emerged from between the rice plants. They swam around in the pool of water for 5-10 minutes before they called for the chicks to come out from among the rice plants.” 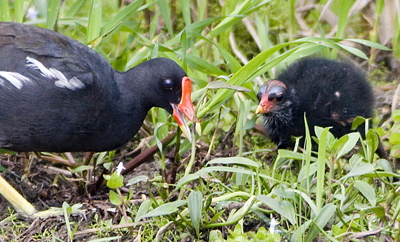 All the time the chicks stayed hidden among the tall rice plants, staying very still. They were not visible at all. Cautiously, they emerged, entering the water only when the parents coaxed them (above). Every 10-15 minutes the chicks would touch beaks with the parents, probably for re-assurance. 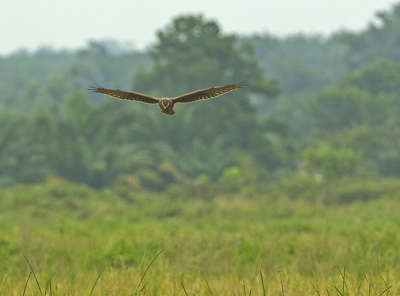 Then suddenly from above, there appeared a black kite with its head looking downwards at its flight path (above). It must have spotted the moorhens. Immediately the family scrambled for cover and disappeared form sight. 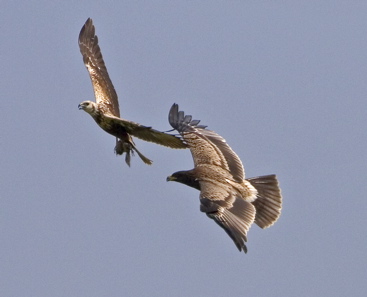 Large migratory raptors like Western Marsh Harrier (Circus aeruginosus) [Please see HERE] and Steppe Eagle (Aquila nipalensis) can easily take an adult moorhen. In the above image, the former is clutching a bird in its talons with the latter trying to snatch it or to make it drop its prey. There were also White-bellied Sea Eagles (Haliaeetus leucogaster) above, patrolling the area over the rice fields the year round. These birds have sharp eyes and can easily spot the moorhens.

When the coast was clear, the cycle repeated itself – the parents came out alone, tested the waters after which they called the chicks out to the water and performed the re-assurance ritual of touching beaks. 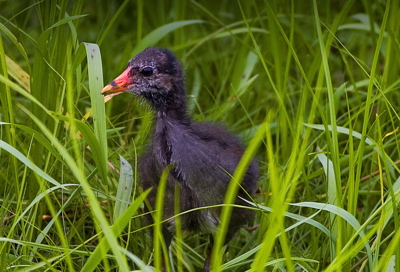 Moorhen chicks are precocial, meaning that they hatch in a relatively developed state, with the body covered with down and the eyes open (above). They leave the nest soon after hatching, usually after one to two days, swimming by the third and diving by the eighth. Both parents feed and care for the chicks. Immature birds of the previous brood as well as adults of the group may also chip in. Brooding may continue until about 14 days. The chicks can feed by themselves around 21-25 days but continue to be fed for up to 45 days. They fledge at 45-50 days.

The chick above is one of four from a family of the moorhen Allan spotted. There were at least three families in all.

Around the end of October 2006 Cheong Weng Chun also encountered Common Moorhens in the paddy fields of Malacca, Malaysia (below). The parent birds were feeding the chicks with apple snails that were collected from the shallow areas. Only small snails were selected, the larger ones were not taken. Weng Chun thinks that the shell of the smaller snails is probably softer than that of the bigger ones. 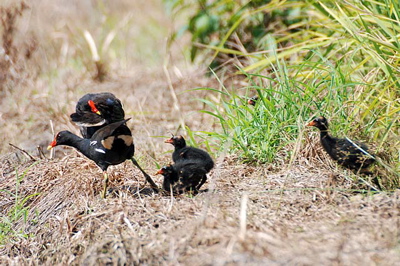 Input by Allan Teo and Cheong Weng Chun. Images by Weng Chun (top two and bottom) and Allan (the rest). 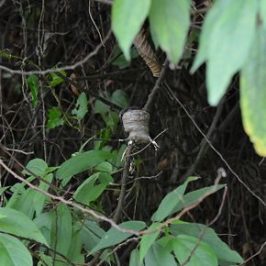 “My wife and I spent the day in this hill resort to image a few... 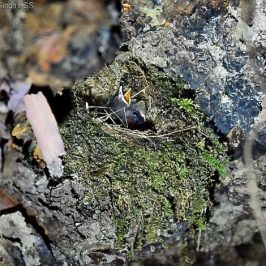