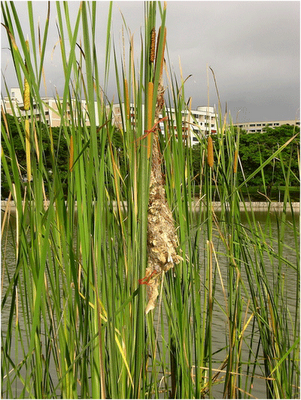 At Punggol Park in late September 2006, some enthusiastic but misguided person has interfered with the nesting of a sunbird in order to get his or her perfect shot.

It was possible that the reed where the nest was attached was subsequently cut and firmly secured to a bunch of other reeds, again to ensure that there was minimum swaying of the nest with every breeze.

The nest was then still active as a female sunbird was seen flying back and forth from the nest. There must have been eggs inside, or else chicks.

A week later the nest appeared ‘loosened’ and abandoned.

The bottom portion of the nest was damaged, possibly by predators – whether two-legged or four legged cannot be established. The nest contents were probably gone. 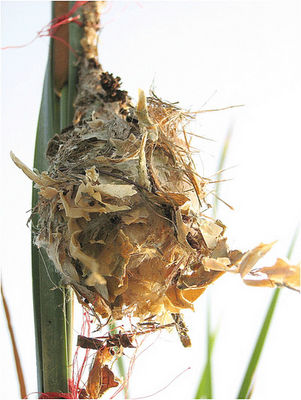 Now can we blame the birds for building their nest by the water’s edge where people are constantly moving around? Do we blame the guilty person for such unethical method to get perfect shots of the nesting birds?

One happy photographer has obtained his/her perfect shots. But one nesting effort has gone to waste. Pity!

“A series of photos show a guy catupulting birds foraging figs on a ficus tree....