The Oriental Scops-owl (Otus sunia), a smallish bird (16-20 cm) that is a winter visitor and passage migrant to Singapore, was sighted on 12th November 2006 at MacRitchie.

It roosts in holes or against tree trunks or even under dense foliage. When sighted, the owl was on a branch of a tembusu tree (Fagraea fragrans). When it realised that is was spotted, it remained quietly on the branch, eyeing suspiciously the birders around. Although its eyes were half-opened, it continuously kept track of the people around. When more people arrived, the bird remained unconcerned, or so it seemed. This could be because its perch was high enough to be well away from the birders below.

According to the literature, it assumes a “tall-thin” posture when spotted. This it does by stretching vertically, compressing its plumage and erecting its ear tufts. At the same time it keeps its eyes almost closed. 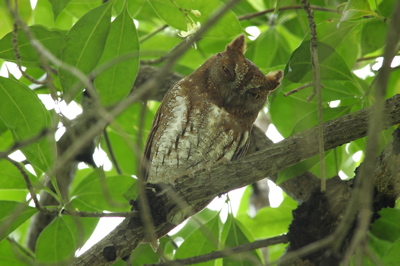 Thus most of the images show this phase, the body slim, the plumage compressed and the ear tufts erect (above and below). However, a few images taken some time after most of the people drifted off showed the owl in a more relaxed mood. It’s body was puffed up but the ear tufts were still erect. 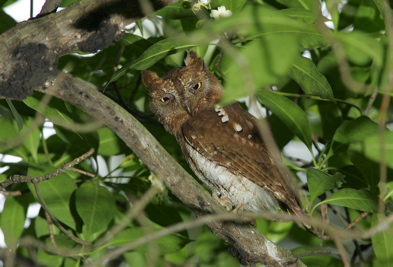 Oriental Scops-owl takes a wide variety of prey, especially insects and spiders. It also eats moths, beetles, cicadas, grasshoppers and small rodents and birds. It generally hunts from a perch, swooping down to catch prey on the ground, in flight or from the forest canopy.

And according to KC Tsang, “…it was an adult Rufous Morph, but I am not sure if it is of the stictonotus race.”

Warning on owl pellets: Owl pellets may contain harmful and dangerous bacteria such as salmonella and hantavirus that can cause mild influenza to respiratory and kidney failure. Do not handle with the bare hands and wear a dust mask. Pellets should be wrapped in aluminum foil, heated in a conventional oven for 45-60 minutes at 300ºF (approx. 150ºC). Only then should you examine the contents, usually small bones. So birders, be warned! Source: “Owls: A wildlife handbook by Kim Long, Johnson Books, Boulders.”