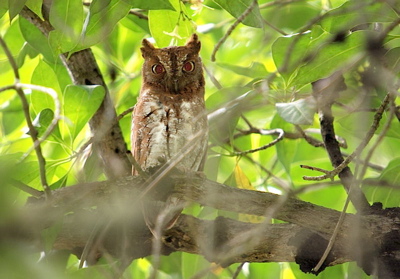 The Oriental Scops-owl (Otus sunia) is a rare winter visitor and passage migrant to Singapore. So when a bird was spotted during the early morning of 12th November 2006, birdwatchers of every genre were out in force to view it.

It all started when R. Subaraj was conducting a bird-tour of the MacRitchie area. While scanning the trees with his binoculars, he was pleasantly surprised to see an Oriental Scops-owl roosting in a tembusu tree (Fagraea fragrans). As most birders have not seen the owl before, he immediately phoned a few close contacts, giving the location. Within a few hours, a few birders and photographers were at the scene. And by afternoon, more came. 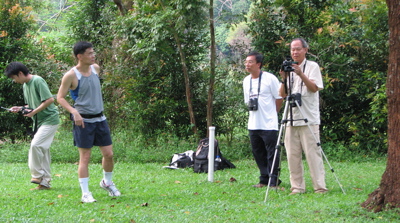 Why the excitement? According to DR Wells (1999), Birds of the Thai-Malay Peninsula, “There have been no recent records from well-monitored Singapore island.”

One of the first to arrive at the scene, KC Tsang managed to take a few pictures of the owl. And according to KC, “…I was informed that this bird was sighted, and recorded some four times only in Singapore, and is considered a vagrant by C. Robson.”

Whoever passed on this information to KC is obviously wrong. Subaraj was the first to disagree. He believes that there were more sightings than that. According to him there were at least six other sightings, and he referred me to the cover photograph of the Iora, the so-called Journal of the Nature Society (Singapore) Bird Group. The issue was the inaugural and only issue, published in 1994 (below).

The image of the Oriental Scops-owl that graced the “journal” was taken in Mount Faber by Goo Chuen Hang on 13th November 1994. In an article by Lim Kim Seng entitled “Singapore Bird Report” it was reported that this was the second report for Singapore (p 49).

Apparently this is again incorrect. The Mount Faber sighting was the fourth.

Our sometime field ornithologist, Wang Luan Keng, who is attached to the Raffles Museum of Biodiversity Research, NUS, has this to say: “I have a total of 13 past records. Most people missed out the museum specimens, which are important sources of records.”

In addition, Subaraj reports that a bird was mist-netted by Prof NS Sodhi of NUS when he was undertaking a survey of the nature reserves. Also, one crashed into a home in Changi, cared for by Subaraj to be later ringed and released in Sg Buloh. 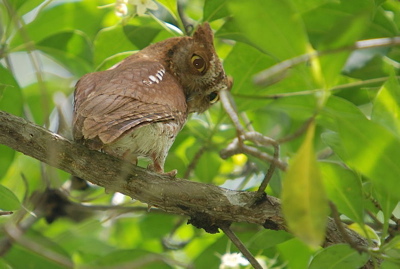 As Luan summarises, “You can certainly say that the bird is probably more common than recorded, judging from the museum specimens that everyone excluded. Most people dismiss museum specimens as useless but surely dead birds were once alive and should be counted as records too and not just what the birders can see?

“I don’t know why people are so obsessed with races. Races of birds are not very meaningful at all. If they are distinct enough and their genetic makeup proves so, they should be treated as distinct species. Until then, you can only call them populations. And most of the time you can only tell them apart if you have the bird in the hand.”

Birders seldom sight the Oriental Scops-owl not because it is not there. Birders tend not to be aware of its presence, considering that the bird tend to remain silent during its wintering period here. So birders are not alerted to its presence, as in the case of other owls.

It is to be noted that the previous early arrivals of this owl were 13th November while this time the bird arrived on 12th November, one day earlier.

Input by R. Subaraj, Wang Luan Keng, KC Tsang and YC. Images of the owl by KC. And thanks to Subaraj who generously shared his sighting, many birders got to see this rare owl.

It was about 11 pm on the night of Wednesday 9th November. Timothy and myself...