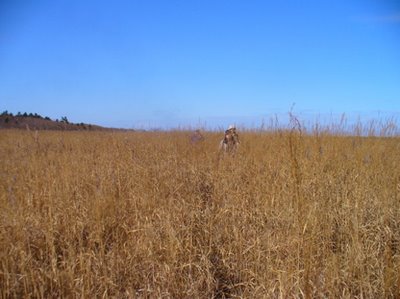 Gloria Seow was holidaying in Japan in October 2006 where she scored 77 lifers even though it was off-season for birds then. But that would be another story. What she e-mailed me was an interesting image of a dried-out field mouse. It was impaled upon a low bush growing in an open grassland bordering a marshy area in Hokkaido (below). According to the Japanese birders who accompanied her, it was possibly the work of a Bull-headed Shrike (Lanius bucephalus). 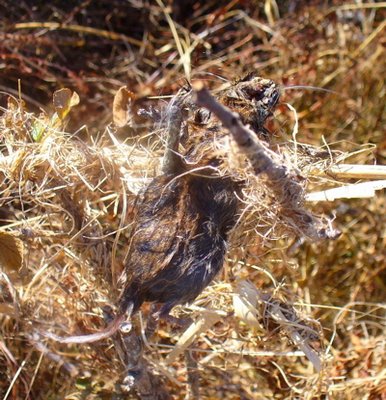 We have three species of shrikes. Tiger (Lanius tigrinus) and Brown (Lanius cristatus) are winter visitors as well as passage migrants while Long-tailed Shrike (Lanius schach) is a common resident. But according to our bird specialist R. Subaraj, “Long-tailed Shrikes are actually very uncommon residents with some movements that are not fully understood. That is why they tend to be at known sites at only certain times of the year. Additionally, there is sometimes an influx of this species…..migrants?”

Shrikes have the reputation of impaling their preys on sharp thorns. They are thus known as “butcher birds. We have an earlier posting on a Tiger Shrike dismembering a large scarab beetle and another on the bird swallowing a lizard. 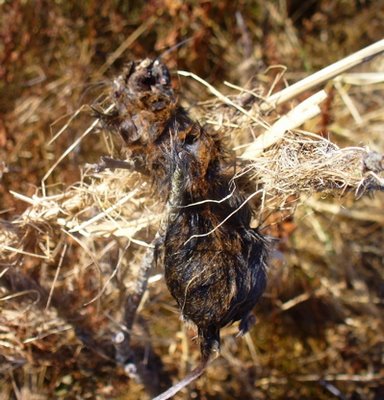 R. Subaraj reported seeing the headless corpse of a Yellow-rumped Flycatcher (Ficedula zanthopygia), impaled on a thorn of a short tree that he suspected was the work of a Long-tailed Shrike. And in Malaysia he once came across the “larder” of a wintering Brown Shrike consisting of impaled insects along a stretch of barb wire.

What we did not have is an image of a vertebrate impaled by a shrike. Now we have, thanks to Gloria, although it is not local but from Hokkaido.

Now here is a challenge to birder-photographers. Look out for a shrike-impaled prey and bring back an image!

Input and images by Gloria Seow.