Changi Village, with its row of large and old angsana trees (Pterocarpus indicus), has been the meeting place of a number of Oriental Pied Hornbills (Anthracoceros albirostris) that were seen looking for nesting cavities (left). These trees are also a favourite with the Tanimba corella (Cacatua goffini) and Red-breasted Parakeets (Psittacula alexandri). The latter two species are also tree hole nesters and have been coexisting rather peacefully in these trees. 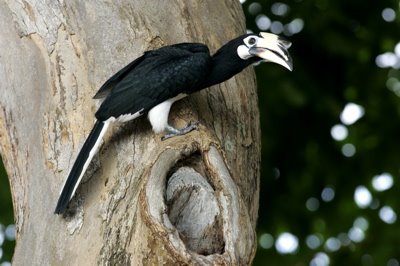 The hornbills had been checking the tree where no corellas and parakeets were congregating. However, of late they apparently moved to those trees where these other birds were present (above). What happened next was that conflicts occurred, with the corellas shrieking whenever the hornbills appeared.

Our bird specialist R. Subaraj reported in July 2006 that he saw the hornbills arriving regularly at around 5 pm, always causing the corellas to panic, shrieking loudly. At times the hornbills were seen perching in front of the cavity as if blocking the entrance.

Meng and Melinda Chan were at Changi Village on 31st July 2006 and witnessed the arrival of the hornbills at 4.30 pm. Unfortunately the corellas and parakeets were not around the nesting holes. So there was no excitement. The parakeets only appeared at around 6 pm by which time the hornbills had left. 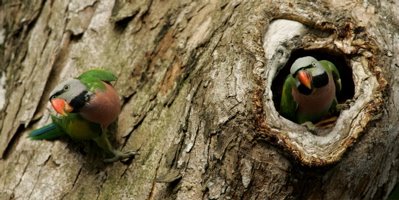 Certain nesting holes were sometimes occupied by corella and sometimes by parakeet (above). As these birds were used to living in close proximity with each other, there was no conflict when one found the other inside the cavity. 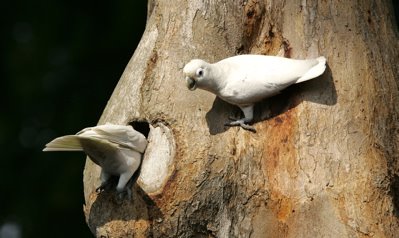 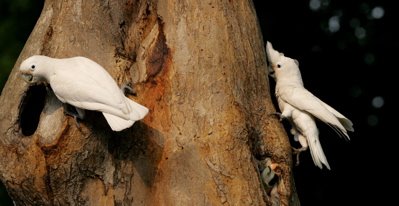 But this was not always the case. On 6th August a pair of corellas arrived at a tree with two cavities, one on either side of the trunk. The left cavity was apparently empty as the corellas took turns checking it out, one even entering the cavity for a short while (above, top). The right cavity was occupied by a parakeet. The corellas again took turns checking this right cavity, to occasionally meet with protests from the parakeet inside. Every now and then the parakeet would poke its head out, scolding the intruder (above, bottom). This would frighten off the corella who would then jump back with wings flapping. This went on for some time. Unable to expel the parakeet from the cavity, the corellas eventually left the scene.

Peace returned to Changi Village – until the next confrontation!