There seem to be quite a few species of exotic red parrots roaming the urban areas of Singapore, as seen from the images sent in to the various e-loops. 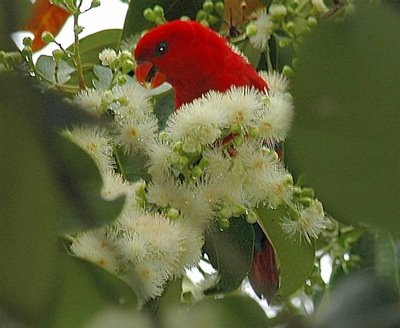 In March 2006 Johnny Wee sent in an image (above) with a note stating that the red parrot was seen eating the fruits of the sea apple (Syzygium grande). Our bird specialist R. Subaraj has this to say: “The parrot in the photo is a lory. It is possibly a Red Lory (Eos bornea), though this cannot be confirmed definitely as the photo does not show the wings and most of the body, and the blue eye patch is difficult to see in the photo. The Red Lory is native to the Moluccas but is a regular escapee here, though it has not established itself as a feral species yet.” 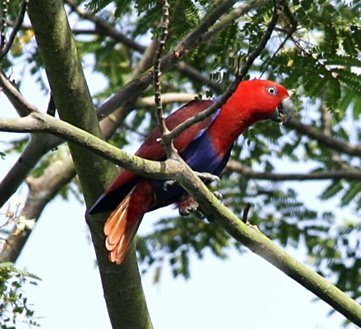 Melinda Chan also sent in an image of a red parrot (above) and Subaraj has this to say: “This is a female Eclectus Parrot (Eclectus roratus). The male is green. It is an escapee, being native to northern Australia, New Guinea and the Moluccan islands of Indonesia. There are several past records of such escaped parrots around Singapore as the bird is regularly traded, but it has never become established.”

These are actually parrots of the rainforest canopy in their native countries. The feed on fruits, seeds and blossoms. They are noisy and conspicuous, because of the bright plumage. The remarkable sexual dimorphism has caused endless confusion to birders. 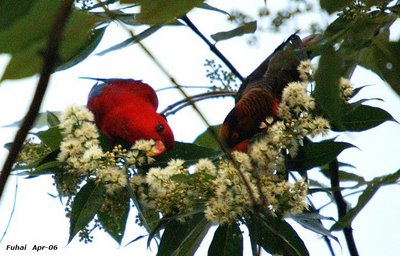 Then Fuhai Heng sent in another image (above) with a note saying: “When we travel overseas, we feel glad when meeting someone from our own country. I noticed it is the same for escapee birds in Singapore. These birds gather for breakfast regularly at the Ang Mo Kio area to feast on the nectar from the flowers of the salam tree (Syzygium polyanthum) tree. They arrive at 7 am and leave half an hour later at the cue of one leader.”

Subaraj has this to say: “Actually, this isn’t a Rainbow Lory at all. It is one of the Eos lories of Wallacea, Indonesia. It is possibly the Violet-necked Lory (Eos squamata) of the North Moluccas.

“Apart from the Rainbows, there have been red lories flying around various parts of Singapore for a number of years now. Most of the time, we are unable to identify the species in flight but careful observation when perched or even better, a photo, will show us just how many different members of this genus and the Lorius genus free-fly here.

“Most of these parrots are protected by international and Indonesian laws but enforcement in most of Indonesia is weak or non-existent. As a result, large numbers of these beautiful parrots are smuggled out each year and many move through Singapore, as the constant escapees prove. Many can also be readily found available at pet shops here.

“None of these lories have established themselves as feral species in Singapore….yet! The Rainbow is the closest to doing so, with one reported breeding record. It would be good to continue monitoring them and report numbers as well as produce photos for identification of species.”

“I read articles posted on your website about the Yellow-fronted Canary (Serinus mozambicus). I was...