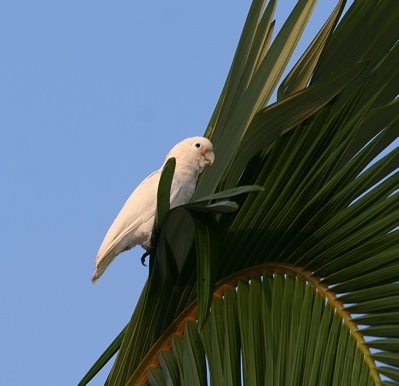 If you are at Changi Village and hear loud screeching, look around you, especially at the many tall angsana (Pterocarpus indicus) trees along the road. These are the Tanimbar Corella (Cacatua goffini) (above), also known as Tanimbar Cockatoo. There are usually about five birds around these trees and they are hole nesters.

There are up to 20 such corellas in the Loyang/Changi area. They are also found elsewhere in Singapore, including about 40 on Sentosa.

The other parrot commonly using these trees are the Red-breasted Parakeet (Psittacula alexandri), also known as the Moustached Parakeet. There are also about three Yellow-crested Cockatoos (Cacatua sulphurea) (below) around Changi but they hardly visit the village. 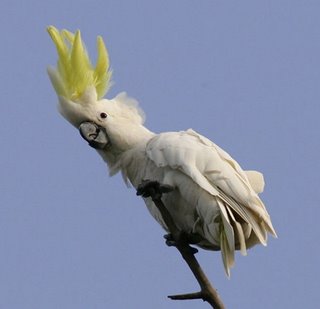 All the above birds are not natives of Singapore. Tanimbar Corella is native to the Tanimbar Islands of Wallacea. The Red-breasted Parakeet has always been found in Java, Bali, India, Andaman Isle, China, Indochina, Myanmar, Thailand, Sumatra, Borneo and Java. Both were introduced to Singapore three to four decades ago through the bird trade. All have established themselves in Singapore and have feral (i.e. tame birds that returned to the wild) breeding populations.

In Singapore, the Tanimbar Corella feeds on the fruits of various wayside trees like Sea Almond (Terminalia catappa), pong pong (Cerbera odollam) and starfruit (Averrhoa carambola). They are wasteful eaters, pecking away a few morsels only.

One or two Sulphur-crested Cockatoos (Cacatua galerita), also escapees, have recently been seen in Sentosa.

PS: All three cockatoos are endangered. Yellow-crested and Tanimbar are listed in Appendix I of CITES while Sulphur-crested is in Appendix 2. This means that commercial trade in these birds is prohibited as of 14th June 2006. 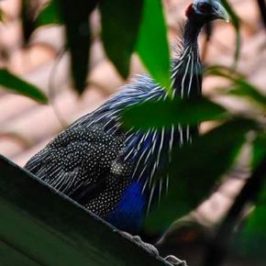