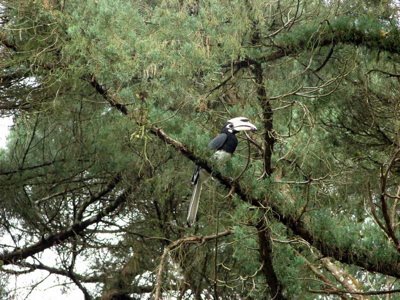 On 16th July 2006 at about 10 am, Yeo Seng Beng was pleasantly surprised to see three Oriental Pied Hornbill (Anthracoceros albirostris) around the Binjai Park area. The three birds, two adults and a smaller juvenile, were slowly moving together from tree to tree. Armed with his camera, he followed the birds. And apparently they allowed him to get close enough for him to notice a bee between the beak of one of the birds. As Seng Beng wrote: “From one of the photos, you can see the bumble bee in it’s mouth. I could even hear how crunchy it was, as it was eating it! That’s how close the birds allowed me to approach.” 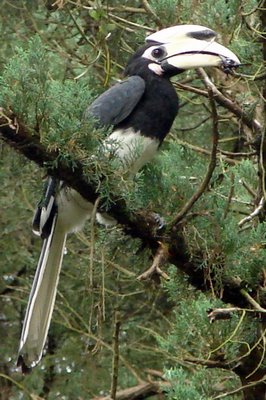 The Binjai Park and the surroundings areas have been visited more than a few times by these impressive hornbills. Their arrival would be announced by their characteristic loud calls and they would loiter around some trees along the roadside and even in someone’s garden. And without fail, their presence would result in great excitement as seldom do people see such large and impressive birds in our urban areas.

Seng Beng has also been active in persuading National Parks Board to reintroduce binjai trees (Mangifera caesia) back to Binjai Park. After all, the estate has been named after these exotic fruit trees that belong to the mango family. The area was possibly once a fruit orchard planted up with many such trees. Currently there are still a few tall and very old trees around the housing estate – within the confines of private compounds!

We wish to thank Dr Yeo Seng Beng for sharing his experience and images with us.