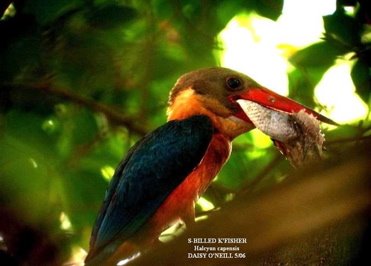 Seeing a kingfisher fishes for its meal in swift, precision manoeuvre is always a joy nature provides. Witnessing a ruthless kill of the catch by whacking the fish to death against a thick branch beside which the bird perched, sent me speechless. Having that one rare opportunity to digiscope a Stork-billed Kingfisher (Halcyon capensis) trying to swallow a catch bigger than his head, sent tremors to my fingers as I nervously raced against time to capture this gorgeous and disproportionately colourful bird framed in that moment of time – time that stood still… just for me. 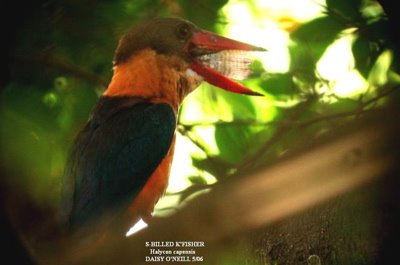 The Stork-billed Kingfisher belongs to the family of Alcedinidae and is one of the 86 species in the world under the sub-family description of Halcyon. The word ‘HALCYON’ is derived from Greek mythology. How it was given this name is told in the following and interesting ‘Romeo & Juliet Grecian-style legend. 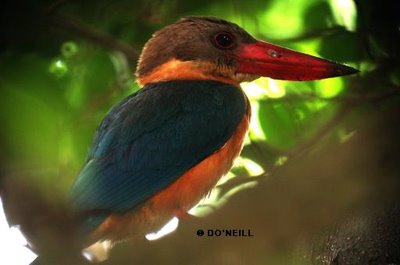 ‘Halcyone’, once Goddess of the Winds married a Trachisan king called Ceyx. Soon after their marriage, the king drowned in a stormy sea. The grieving queen having learnt of his death in her dream was overwhelmed with sorrow and took her own life by jumping into the sea close to where King Ceyx’s ship was wrecked. The Gods felt sorry and took pity on Halcyone and resurrected Ceyx, changing the King and Queen into kingfishers so they may live happily together, always close to the element of water. It was also promised by the Gods that when Halcyone and her descendants were hatching eggs in their nests, which were to be lined with fish bones floating on the tide, the winds would be stilled and the waters calmed.

It was also promised by the Gods that the seven days before the shortest day of the year in December was the time to build their nests and the seven days afterwards to hatch the eggs. Keeping in mind that the legend came from Greece, the Mediterranean Sea is usually calmer during the shortest days of the year. This ties in with the old stories, hence the term ‘halcyon days’ refers to a period of contentment and calm.

It would also be interesting to research the Chinese Almanac to determine when the shortest day would be for those who aspire to search for nesting sites of the Stork-billed Kingfishers in Asia. Should you come across a nesting site – a hole lined with discarded fish bones, you should know that it belongs to the Halcyon subfamily of kingfishers, one that lives on fish provided as promised by their mythological Gods.

If you see and photograph a nesting site of the Stork-billed Kingfisher and be unseen, one has to be born under a lucky star.