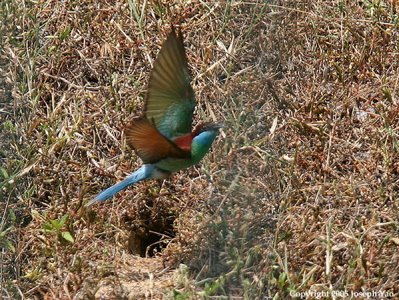 Like all bee-eaters, the Blue-throated (Merops viridis) is an earth-hole nester. It excavates a tunnel in the sandy ground, often from a slight incline, but also on flat lawns. The one metre or more tunnel enters the ground at a shallow angle, ending in an egg-chamber. And seldom does the bird reuses it the next year. 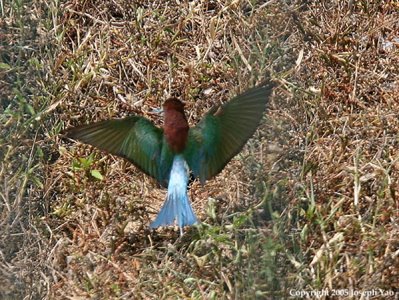 The sharp, hooked claws and long tail of the bird adapt it well to perching on vertical banks. From this position it excavates its burrow, using its bill to stab at the compacted soil and its powerful claws to dislodge the loosened earth. As the cavity deepens, the bird clears the loosened earth by using both legs, supporting itself on its ‘wrists’ and bill tip. Invariable a small heap of soil forms in front of the nest hole entrance

These strong fliers are mostly long distance migrants and have complete mastery of the air. They are accomplished aerial hunters with their wheeling and gliding flight on long, pointed wings, and with twists and turns in the chase or slow pursuit. 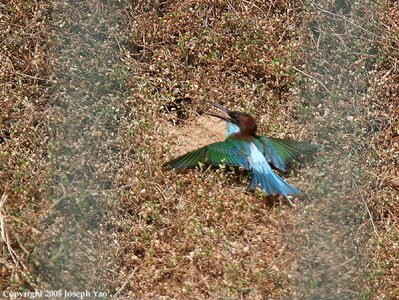 Although the bird spends most of its time in the air, it comes to the ground for short periods to preen and to sunbath. It lies spread-eagled on the ground with its wings fully extended and tail feathers fanned. At the same time it pants to cool itself.

Input and images by Joe Yao,