From mid-October 2005 right through to February 2006, I had been hearing the call of the Asian Koel (Eudynamys scolopacea) almost every morning at about 6.30 am or thereabout. Sometimes I would hear the call later in the morning and once in a while in the evening as well. I have had people complaining of being awaken by the call as early as 4.30 to 5.00 am but in my area the birds apparently wake up later. 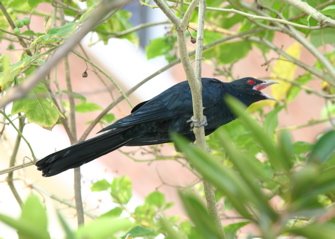 These birds, there must be more than a pair, roost among matured trees growing in an abandoned area between two housing estates, seldom visited by people. As such I never saw them but always heard their calls.

Asian Koels are extremely shy birds. Years ago they were always heard and seldom seen. More recently they had been making their presence known especially when they visited my Alexandra palms (Archontophoenix alexandrae) to feed on the ripe fruits. But they were still shy, flying off once they noted my presence.

From mid-February 2006 the call dried up to an occasional kwaking. Then around the end of June the call was again heard, but not as regularly as previously. 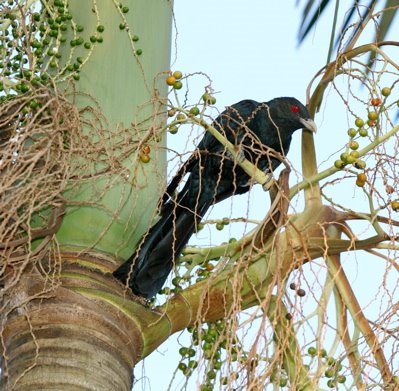 During the first few days of July I had the opportunity to view them close-up. Four male koels flew in at around 5.30 pm and stayed for about an hour to an hour and a half. A bird would suddenly arrive and perch on a fruiting branch of my Alexandra palm accompanied by loud kwaking. Another would soon fly in to be followed by the remaining two. Sometimes they would fly to the Golden Penda (Xanthostemon chrysanthus) tree along the roadside.

A pair, perching on different branches but facing each other, would then indulge in duetting. The perching appeared precarious as the birds rocked forward and backward, as if trying to balance themselves. Their tails would flare out somewhat and sometimes they would touch beaks. During this time one or more may regurgitate seeds from earlier feeds. After some time they would simply perch quietly, not moving much and not appearing to communicate. Then suddenly they would all fly off. 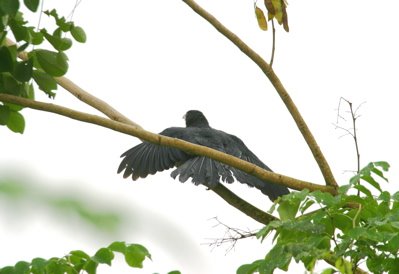 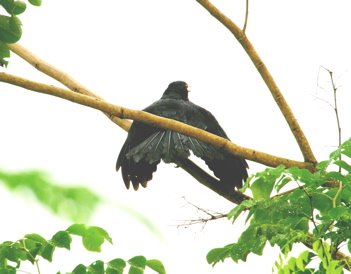 A lone male koel was recently seen perching on a branch of the Golden Penda and wailing continuously. As it belted out a series of koel-koel-koel calls, its wings flap up while the tail feathers flare out. This went on for up to five minutes before the bird flew off.