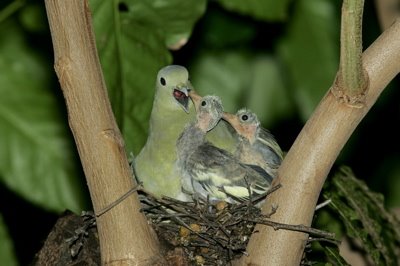 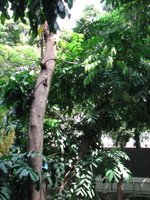 On 3rd July 2006 Gloria Seow spotted a female Pink-necked Green Pigeon (Treron vernans ) sitting in a nest lodged between the branches of a tree (possibly Aphanamixis polystachys). The tree was just behind her first floor office in the MacPherson Road area, near to where the regular office smokers congregated to discuss their battle plans. For the first few days she saw only the female bird incubating the eggs. Only much later did she see the more colourful male at the nest.

The bird would sit quietly in the nest, occasionally shifting positions. The sudden appearance of a Sunda Pygmy Woodpecker (Dendrocopos moluccensis) on a branch close by was totally ignored.

As Gloria recounted: “Showed most of my colleagues the female and male birds with my binos. They were suitably impressed and intrigued that there could be green pigeons in Singapore…” 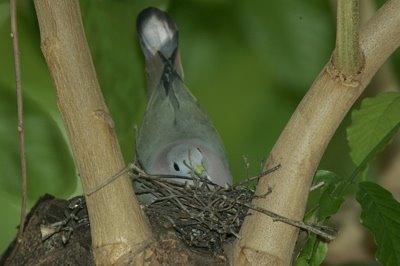 On 11th July the eggs hatched.

“I thought I saw papa regurgitating (at that time I didn’t know what he was doing). He would arch his neck downwards and contraction waves would pass along the length of the body as food pours forth within… Suddenly papa moved and revealed one chick beneath him!” So there were two chicks. 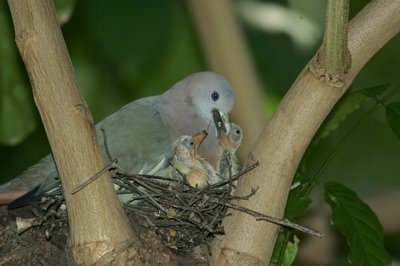 “Papa was feeding the chicks with crop milk every 5 to 15 minutes. When one chick was fed, the other would call out softly in protest. The chicks were covered in yellow down, their eyes appeared to be still closed and sealed within a thin membrane, and they had a yellow beak. I reckon that they were barely 1-2 days old. Papa looked tired, his feathers appeared ruffled and un-preened and he was forever wary of foreign sounds, whipping his head around in alarm with every new aural interference, human or avian made. Thank God such disturbances were few and far between.

“My presence was acknowledged as papa quickly orientated his body and sight line in my direction when initially he was facing the other way. Of course, I posed very little threat as I was seated a good 4 meters below him and every time somebody walked by, I diverted attention away from the nest by fiddling with my other papers and equipment.”

Input by Gloria Seow and images by Chan Yoke Meng – top down: female with chicks, tree where nest was, male in nest, male with chicks. Ali Ibrahim helped identify the tree.