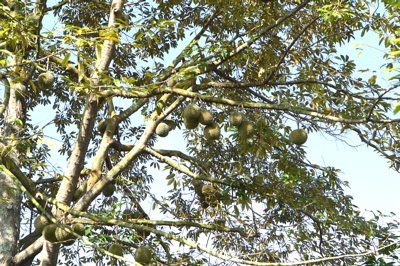 About a year ago or earlier, Goh Si Guim came across a durian tree (Durio zibethinus) at Bukit Batok West with a ripenig fruit whose outer skin had a hole, probably gnawed by a squirrel. There was a Laced Woodpecker (Picus vittatus) around the fruit. Whether it was actually eating the durian flesh or looking for insects was not established. Fuhai Heng managed to capture an image of the damaged fruit with the woodpecker on it (below). 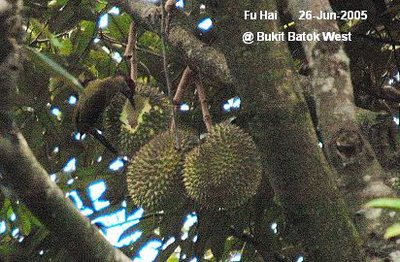 There the matter rested until James Heng took a walk along Venus Drive on 10th July 2006 and encountered a tree laden with fruits with many squirrels and birds crowding around the ripening fruits. This is what he wrote:

“This evening I passed a durian tree which was laden with fruits. What was unusual was that there were lots of sunbird and flowerpecker activities.

“As the durians are getting ripe soon, many plantain squirrels (Callosciurus notatus) (with a black and cream coloured band on the side of its belly) have gnawed through many of them. Whenever a squirrel had had enough and moved away, Plain-throated Sunbirds ( Anthreptes malacensis ) quickly appeared and perched on the durian’s thorns and pecked away at the exposed flesh. They were also seen licking the white inner portion of the husk.

“Several Orange Bellied Flowerpeckers (Dicaeum trigonostigma) were also busy darting about that tree. On several occasions, they landed on the durians and pecked away. Unfortunately, from my angle, I could not see if they were reaching into any of those bored cavities in the fruits.

“Hmm, seems that like humans, some birds just cannot “tahan” the lure of this fruit.” 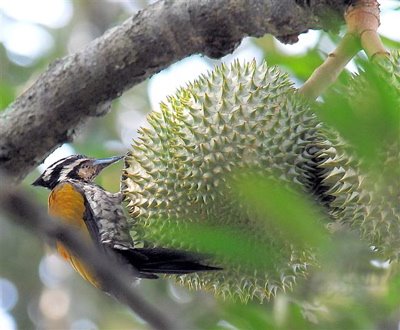 Johnny Wee later visited the tree and took a picture of the woodpecker that was eating away at a fruit with an opening for about 8 minutes before it flew away satisfied (above). Again, Johnny was not sure whether the bird was eating the fruit or the insects/worms found around it.

It has been established that woodpeckers are insectivorous as well as fruigivrous.

We thank Goh Si Guim and James Heng for their input; Fuhia Heng and Johnny Wee for their images; and R. Subaraj for identifying the squirrel. 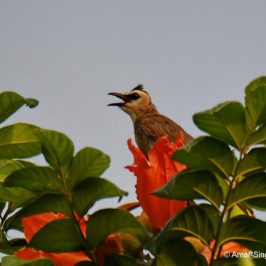 “I have shared on birds feeding on the nectar of the African Tulip Tree (Spathodea... 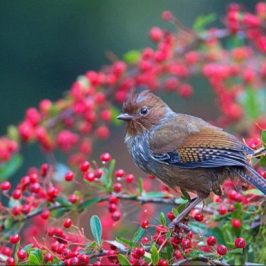 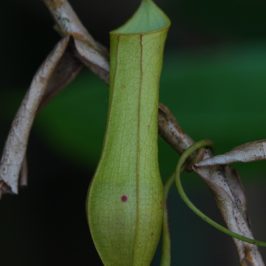 Soh Kam Yung expressed his pleasure at seeing a pitcher plant in the wild (as... 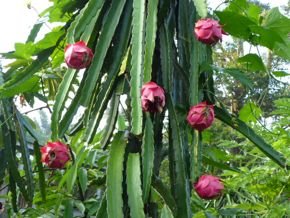 The dragon fruit (Hylocereus undatus) was introduced to this part of the world only during...