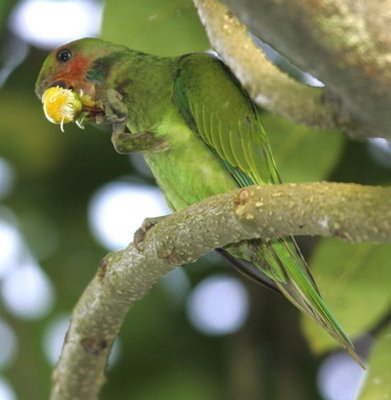 The yellow simpoh (Dillenia suffruticosa) is a common shrub of rural areas and secondary growths. The large leaves were once used to wrap food in wet markets. They are still being used to wrap tempeh, the slightly fermented soya bean cake used in local cooking.

The plant flowers throughout the year, putting forth its large and attractive yellow flowers found on long flowering stalks. Along each stalk usually only one flowering bud bursts open during the early hours of the morning. It becomes fully opened just before sunrise. Lasting only a day, the flower then sheds its petals by evening and the fleshy sepals fold back on the developing fruit. Along any flowering branch there would be flower buds and developing fruits that look like flower buds, usually larger. 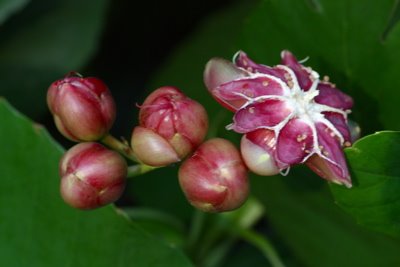 When the fruit is matured, the fleshy sepals surrounding it unfolds, and the fruit itself splits opens into a number of parts. The separate pink rays bordered by white is filled with pulpy scarlet seeds. This colourful structure may mislead some to think that it is the flowers. But it is definitely the fruit. The image above shows the ripe fruit (right) minus the seeds, which are a favourite with birds. The four bud-like structures are the developing fruits looking like flower buds. 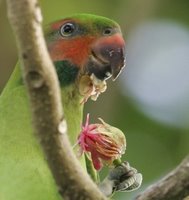 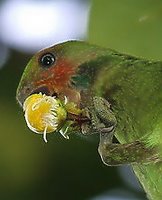 In April 2006 Chan Yoke Meng photographed a Long-tailed Parakeets (Psittacula longicauda) eating what looked like a flower bud (top and above right). The bud defied identification until Dr Shawn Lum suggested that it could be a flowering bud of a yellow simpoh. Going back to his collection of shots that were taken at Turut Track, Meng helped solved the problem when he sent one clearly showing a developing fruit (above, left) being chewed by the parakeet. Obviously the bird eats the flower buds as well as the young fruits. Can it be that it is unable to differentiate the two that are found along the same flowering branch?

Images by Chan Yoke Meng except that of fruits by YC. Thanks to Shawn Lum, KF Yap and Angie Ng for assisting in ID. 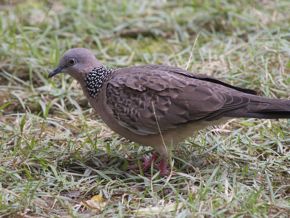 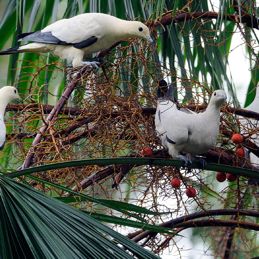 Mark Chua had an exciting encounter with a flock of more than ten Pied Imperial...