Following the posting of the nesting of the Oriental White-eye (Zosterops palpebrosus) by K.C. Tsang recently, Yong Ding Li sent in this report: “…appears that the Oriental White-eyes are fairly well established in Singapore in the form of feral populations and nowadays can be found in many housing estates. Might be wise to be very careful as far as identifying zosterops are concerned as at least four species of white-eyes have occurred in Singapore in a feral state, including Japanese White-eye (Z. japonicus), Chestnut-flanked White-eye (Z. erythropleurus), Mountain White-eye (Z. montanus) and Everett’s White-eye (Z. everetti) and not assume them all to be mere orientals.” 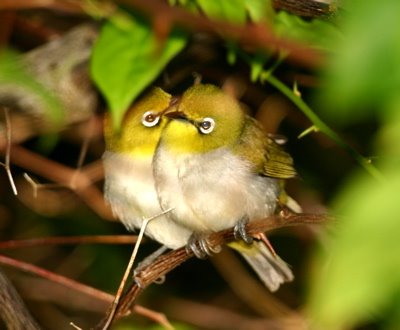 Our bird specialist R. Subaraj has this to say on the status of the Oriental White-eye: “The record by KC is a good confirmation of nesting but there have been records of immature birds being attended to by parents. The species has been feral and widespread in certain parts of Singapore, including Holland Woods, Ulu Pandan, Bukit Batok, Toh Tuck, etc. for more than a decade now.

“The native population of the Oriental White-eye died out long before the 1970s – that is just a starting date for modern records. The current population is believed to have started from escape birds (popular cage bird), both accidentally or deliberately freed. They have been around for at least 20 years and the numbers have been increasing without a confirmed observation of the actual nesting. However, the status of this species was accepted in the late 1990s to early 2000s as CI or common introduction, not a mere escapee!

“The current nesting record changed nothing in terms of the species
status. It will still remain a common introduction like Javan Myna (Acridotheres javanicus), House Crow (Corvus splendens), Red-breasted Parakeet (Psittacula alexandri) and White-crested Laughingthrushe (Garrulax leucolophus). They all originated from escapees/releases and will never become Residents (R) which is reserved for true native inhabitants of Singapore and natural colonists from elsewhere who have established themselves here, like the Oriental Pied Hornbills (Anthracoceros albirostris) on Pulau Ubin for example.

“The term feral is preferably reserved for established introduced populations while the occasional sighting of a different species of white-eyes is best described as escapees. With this in mind, only the Japanese White-eyes (as well as Oriental) are fairly common established feral species and I have them on my checklist as Common Introduction (CI). Populations of Japanese are found at sites like Mount Faber, Telok Blangah Hill, Kent Ridge Park and NUS. Other species of white-eyes are mere escapees including Chestnut-flanked, Mountain(?) and Mangrove White-eye (Zosterops chloris).

Thank you Ding Li and Subaraj for your input. Image by YC. 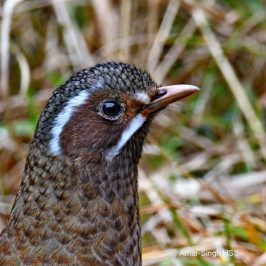 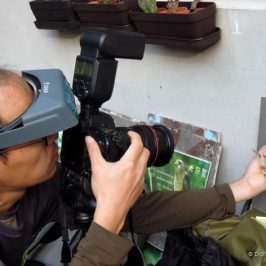