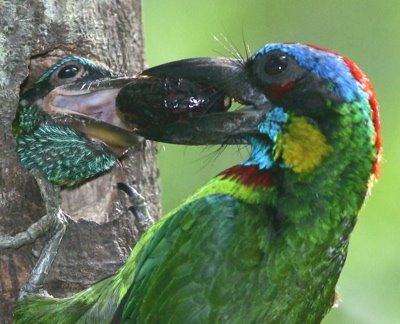 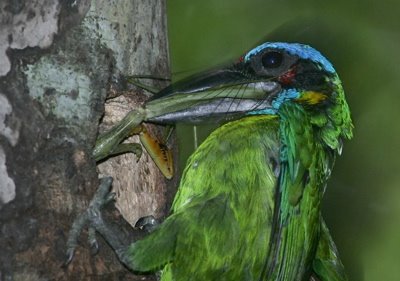 Barbets are hole nesters. They are capable of excavating cavities for their nests from dead and rotting trees. Thus they do not nest in cavities previously used by other birds. These birds are frugivores, feeding mainly on fruits that include figs, oil fruit (Elaeocarpus), Singapore rhododendron (Melastome malabathricum) and mistletoes. They are also opportunistic feeders, able to shift to feeding insects when the opportunity arises. Their young, especially immediately after hatching from the eggs, need a diet of animal protein, necessary for growth and development. But with development these nestlings are fed mainly with fruits.

In a series of observations made recently by Melinda Chan on a nesting pair of Red-crowned Barbets (Megalaima rafflesii), she found that the parents were kept constantly busy bringing food to feed the hungry nestling. Every few minutes a parent would fly to a nearby branch before flying straight to the nest with a variety of fruits and insects. Invariably the nestling would pop its head out, beak agape, to receive the food. Fruits would be brought in twos and threes in the beak of the parent bird. 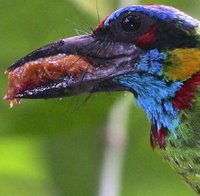 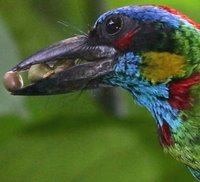 Those fruits that were properly identified include the oval and bluish Elaeocarpus and the smaller round and reddish salam (Syzygium polyanthum). Animal food included a praying mantis.

Feeding was frequent, averaging ten per hour. These feeds may be at intervals of a few minutes to as long as ten minutes or more. Fruits were regularly brought, occasional some form of animal food or other. 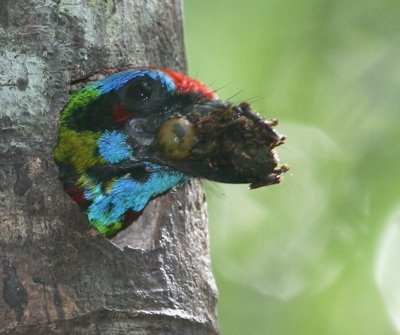 With such frequent feeding, the nest obviously got dirty fast. Once every few feeds the parent bird would enter the nest to do house cleaning. Sometimes cleaning would only be done after a series of feedings. Conspicuous among the wastes were regurgitated fruits of Elaeocapus with the thin fleshy layer and skin intact, probably indigestible to the nestling. The messy portions of the waste consisted of partially digested fruits as well as excreted matters. Barbets are supposed to remove wastes via faecal sacs but in this case wastes were removed by the beakfuls. With the waste in its beak, the bird flew to a nearby branch, shook its head to release the wastes. These collected on the ground below. After wiping its beak clean against the branch six to eight times, it then flew in the opposite direction to collect more fruits.

Input by Melinda Chan and images by Chan Yoke Meng. 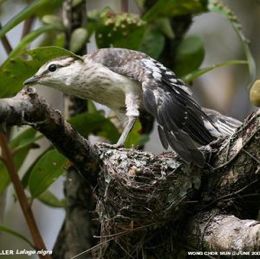 The chicks that hatch out of the eggs in a bird’s nest are commonly known... 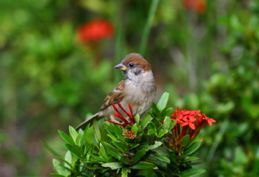 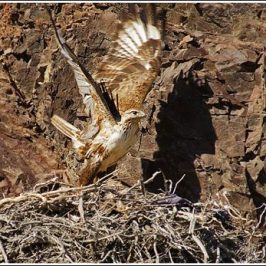