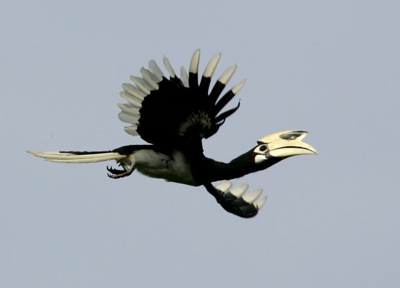 Most birders would have given up on the Eng Neo area by May 2006 as the pair of Great (Buceros bicronis) and Rhinoceros Hornbills (B. rhinoceros) has been visiting rather infrequently. But Meng and Melinda Chan were persistent. They returned to the area again on 20th May and were rewarded with an exciting encounter.

The location was not the rotting tree trunk. Part of this trunk had collapsed earlier, possibly trapping the nest of the Dollarbirds (Eurystomus orientalis) as that portion of the trunk was firmly buried in the ground. The Dollarbirds apparently moved to another cavity found in the nearby living albizia tree (Paraserianthes falcataria).

This cavity was a few months ago occupied by a pair of Hill Myn!s (Gracula religiosa). Subsequently Tanimbar Corellas (Cacatua goffini) were seen around the cavity. Now the Dollarbirds had taken over the cavity and nested there.

On that morning when Meng and Melinda were there, three Oriental Pied Hornbills (Anthracoceros albirostris) visited the tree. These hornbills were seldom seen around the albizia trees, preferring the many wayside trees that dot the sprawling apartment blocks nearby. The Dollarbirds were around and put up a spirited defense, bravely attacking and chasing off the larger birds. 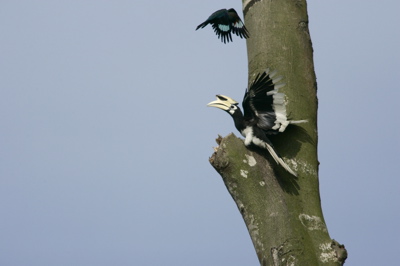 As an added bonus,kthey witnessed the return of the Great and Rhinoceros Hornbills to the neighbouring tree. Both birds followed the same old routine, checking on the cavity. But there was no feeding of the Rhinoceros by the Great.