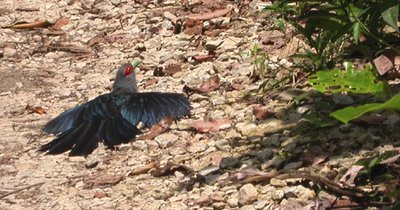 Wu Weizen was walking in the MacRitchie Reservoir forest one afternoon in May 2006 when he suddenly came across a Chestnut-bellied Malkoha (Phaenicophaeus sumatranus) sprawled in the middle of the path. It had its wings stretched and tail feathers well fanned, showing off the brilliance of the feather colours.

“As I approached, it folded its wings somewhat, moved a little to the side (as in the photo), then unfolded its wings again. I watched for a while, and wondered if it was injured. But it flew into the nearby trees as I passed.” The bird was apparently sunning itself in the middle of the forest path. As Weizen added, “It didn’t rain that morning, so what did it do to get itself so wet that it needed to dry off? Took a dip in the reservoir?”

The way the bird was stretching itself reminded Jeremy Lee of anting: “Did you see any ants around the spot? It could be anting. Or maybe just using some of the sun’s heat to get rid of the ticks or mites it has.”

The bird could be sunning itself. Or it could be anting, as suggested by Jeremy. After all, this is a typical posture if it is lying on an ants’ nest to allow the ants to swarm all over it in an effort to rid its feathers of ectoparasites. Obviously if I am to suddenly come across a stunning bird like the makolha stretched out in the middle of the forest path, I would not have thought of anting. Nor would I have examined the site after the bird flew off to look for signs of ants.

If it were really anting, the above image would be a rare shot.

This report by Weizen should make birders aware of the possibility of such an activity. And the next time should anyone come across a bird in this posture, he or she should spend some time quietly observing it. If it is anting, it may subsequently do a little dance and maybe peck off the ants from its feathers. And do not forget to examine the site for the presencer of ants.

Our bird specialist R. Subaraj has this to say: “Sunning or anting….both perfectly feasible. More interesting is that this normally arboreal species does descend to the ground from time to time.”

Thank you Wu Weizen for this unusual observation and the rare image. 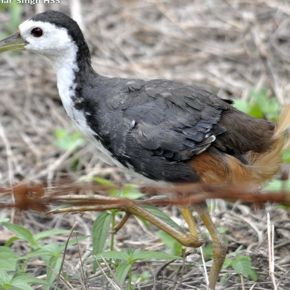 “We are all familiar with adult White-breasted Waterhens (Amaurornis phoenicurus phoenicurus) and the small black...