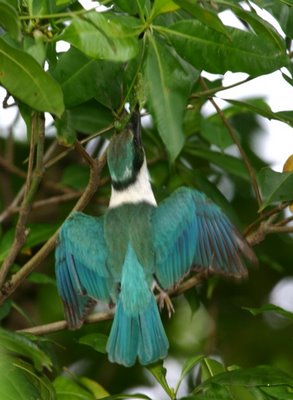 I was out photographing the nesting of a pair of Scarlet-backed Flowerpecker (Dicaeum cruentatum) when I noticed localised movements in the backgtound. On closer look, I saw a bluish bird hovering vertically below some branches, like a ballerina doing an en pointe, but in the air. It was just an unusual manouvering of a Collared Kingfisher (Todiramphus chloris), doing what, I had absolutely no idea.

It was after some attempts that the bird finally achieved what it set out to do. And that was to get at a large and succulent caterpillar that was sitting quietly on a branch of the tembusu tree (Fagraea fragrans). The bird then perched on a nearby branch and began to bash the caterpillar against its perch, possibly to remove its head and empty its stomach contents.

When the bird was on its perch with the caterpiller between its beak, things became obvious. But only after I processed the images that were captured in the field did I notice more details. The images above clearly show that the bird had a caterpillar firmly between its beak. The next question was to ID the caterpillar. To which moth or butterfly does it belong to?

Again an image helped solved this question. There were various suggestions when an image of the caterpillar between the beak of the kingfisher was posted on the BESGroup and other e-loops. A few suggested that it was a hawkmoth caterpillar, and indeed it was. Leong Tzi Ming finally identified it as the caterpillar of Psilogramma menephron (Family Sphingidae), the Privet Hawk Moth. The green caterpillar with white diagonal stripes is commonly known as hornworm because of the presence of a horn at the end of its tail. It is among the largest of caterpillars, growing to a length of 8-12 cm. Without the image, the kingfisher will be recorded as catching a big fat caterpillar! 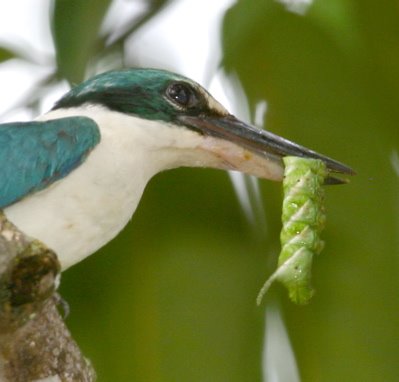 Thanks to Leong Tzi Ming for the ID and to KC Tsang, Jacqueline Lau, Robert Teo, Steven Chong, Margie Hall, Vilma d’Rozario and others for their input. Images and text by YC Wee. 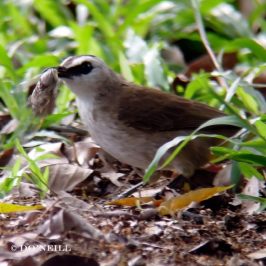 “Finally, it was time DGscope got dusted out. It was time again to re-horn my...